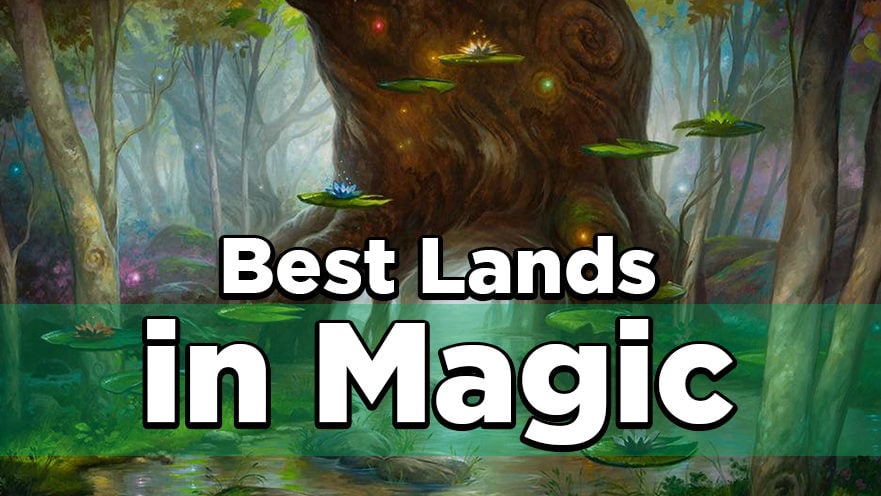 Choosing lands is one of the hardest steps in building a multicolored deck. Each cycle of multicolored lands comes with different benefits and drawbacks, and evaluating them against each other can be a challenge. In this post, we’ll walk through the multicolored lands available in some popular formats and assess how useful they are. Our goal here is to provide useful advice to new players who may be building decks for these formats for the first time.

Throne of Eldraine Standard has four cycles of two-colored lands:

There is also one three-colored land in Throne of Eldraine: Tournament Grounds. This land only produces colored mana if you’re casting Knights or Equipment, though, so it’s best to use that one only in decks that include those types of cards.

The shock lands are the most useful in the most cases: they can enter the battlefield untapped and can therefore start producing mana earlier in the game. However, playing too many untapped shock lands can be dangerous, especially in decks that can’t recoup the loss of life. If you’re not playing an especially fast deck, you may want to use a mix of shock lands and gain lands to offset that life loss, or just play some of your shock lands tapped.

Temples can’t enter the battlefield untapped, so they’re not as universally useful as shock lands, but their scry effect is more versatile than the life gain from the gain lands, since it gives you a bit of control over what you draw next. Don’t get too excited, though; only the enemy-colored Temples are legal in Standard as of Throne of Eldraine. But since Theros: Beyond Death will be released in January, we may have access to all ten Temples in Standard in the new year.

The Guildgates are the least powerful kind of nonbasic land, the kind that enters the battlefield tapped, can tap for one of two colors, and have no other abilities. They’re not generally used in competitive play, since they’re less useful than multicolored lands with additional abilities. Even in casual play, it can be more fun to use lands with more abilities if you have them. The exception to this rule is the “Gates Matter” archetype from Guilds of Ravnica and Ravnica Allegiance. If you’re playing spells that care about how many Gates you have, you should use lots of Gates.

Brawl has access to the same lands as Standard, but since it’s a singleton format, you’ll need to use a wider variety of multicolored lands to keep your mana base equally consistent. Guildgates can be useful here because they’re so widely available, bearing in mind that using them will cause things to happen more slowly. You can also use Command Tower in Brawl, since it was included in the Throne of Eldraine Brawl precons. This technically makes it Standard-legal, but it’s only really useful in Brawl since Standard doesn’t use commanders.

In addition to the Standard-legal lands, Pioneer has the following cycles of two-colored lands:

The Battle lands (a.k.a. “tango lands”) from Battle for Zendikar, which enter the battlefield tapped unless the player controls two or more basic lands;

The fast lands from Kaladesh, which enter tapped unless the player controls two or fewer lands;

The check lands from Ixalan and Dominaria, which enter tapped unless the player controls a land of a certain type;

The Shadow lands from Shadows Over Innistrad, which enter tapped unless the player reveals a land of a certain type;

The cycling lands from Amonkhet, which enter tapped but can also be cycled from the player’s hand;

The creature lands from Battle for Zendikar block, which enter tapped and have activated abilities that make them creatures until end of turn;

The tap lands, which enter the battlefield tapped and have no other abilities.

Pioneer also has a cycle of wedge lands from Khans of Tarkir, which enter the battlefield tapped and can tap for one of three colors. These only produce the color combinations associated with the factions in Khans of Tarkir (one color and its two enemies), but Hour of Devastation also gave us Crypt of the Eternals, which can filter mana into blue, black, or red (the colors of Nicol Bolas).

As in Standard, the lands that can enter the battlefield untapped are the most useful ones. The pain lands enter untapped by default, but also deal 1 damage every time you tap them for colored mana. They’re best to use in similar situations to the shock lands: either in decks with lots of life gain, or decks that can win quickly enough that the damage doesn’t matter.

The lands that check whether you have a related basic land in play or in your hand are more versatile. Use the fast lands if your deck contains very few basic lands, but be aware that you will only have access to the enemy color pairs. The check lands are useful in the widest variety of decks, since they have the greatest odds of entering the battlefield untapped in decks that have more basic than nonbasic lands. The Battle lands are similarly useful, but only the ally-colored cycle is available, so you have to be more careful about what decks you put them in. The Shadow lands are slightly less useful, because they rely on you having basic lands in your hand to bring them out untapped, and because only the ally-colored cycle is available.

The rest of the lands available in Pioneer don’t have abilities that let them enter the battlefield untapped, and their other abilities need to be evaluated based on the decks you’re planning to use them in. The cycling duals are most useful in decks that care about cycling or drawing lots of cards, though they have the extra benefit of basic land types, so they can be used to get bonuses from cards like Karametra and Nissa, Who Shakes the World, both of which care about land types but not basic lands. Pioneer has all ten Temples, and they’re most useful when you need extra control over what you draw; and the creature lands are best in creature-light decks, or landfall decks that prioritize playing lands, since they can simultaneously be lands and creatures.

At the bottom of the tier lists are the tap lands, which are similar to Gates but without the advantage of the “Gates Matter” synergy. Use them if you don’t have access to more powerful and expensive lands, but keep in mind that your deck will play out much more slowly than it otherwise would.

Formats with larger card pools, like Modern, Legacy, and Commander, have even more multicolored lands to evaluate. Here are some of the most powerful lands in those formats.

The original dual lands from Limited Edition Alpha simply entered the battlefield untapped and tapped for one of two colors of mana. These are the most powerful two-colored lands in all of Magic, not only because there’s no restrictions on their mana production, but also because they have the basic land types (for example, Tundra is a Plains Island). As later generations of Magic design lowered the power level of nonbasic lands, the original duals became more and more valuable to Vintage, Legacy, and Commander players.

Fetch lands are lands that can be sacrificed to search for lands of specific types. The most popular cycle has ally-colored lands first printed in Onslaught and enemy-colored lands printed in Zendikar. (These land cycles were reprinted in Khans of Tarkir and Modern Masters 2017, respectively.) These fetch lands require you to pay one life in addition to sacrificing them, but that doesn’t slow down most Modern and Legacy players, who use them to search for lands that enter the battlefield untapped. These lands “fetch” any lands with the specified basic land types, so you’ll often see Vintage, Legacy, or Canadian Highlander players using them to search for original duals. The ally-colored fetch lands are banned in Pioneer.

Formats with larger card pools than Pioneer also have access to the ally-colored fast lands from Scars of Mirrodin. These have the same advantages in fast decks as their enemy-colored counterparts from Kaladesh, so players of these formats have even more options in deck-building. They’re also relatively affordable compared to other lands on this list, so they’re a great option for players on a budget.

Landing on Your Feet

No matter which formats you play, you can use the same rules to determine which lands to include in your deck. Lands that can enter the battlefield untapped are the most useful; lands that filter mana are less powerful than lands that produce mana; and lands with extra abilities or constraints on their mana production need to be evaluated in the context of specific decks. Keep these tips in mind the next time you build a deck, and you may be surprised how smoothly everything comes together.