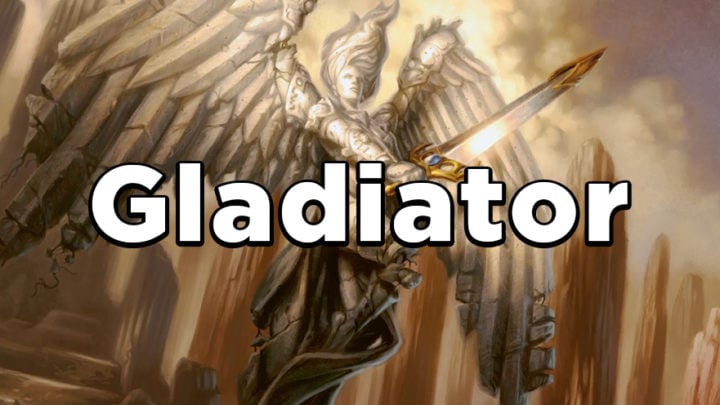 While I can’t pinpoint the exact moment in time my aversion to multiples in Magic began developing, I’m forever grateful that legions of like-minded singleton players empathized with my predicament. It was comforting to know that my preference for “one-ofs” and decks of mammoth proportions happened to be shared among Commander players and competitive singleton formats alike. Yet for me, no matter how satisfying the scratch, there’s always going to be another itch. Thankfully, during a time where digital Magic is the go-to and accessibility is the prominent topic of discussion in the community at large, a new format has entered the Arena.

Gladiator – occasionally labeled “Gladiator: Arena Singleton” or the aptly acronymed “GAS” – is a community-driven 100-card singleton format (originally) designed to be played primarily on MTG Arena. I’ll get to dry technicalities shortly, but waxing poetic about this refreshing format seems like a more appropriate hook. As someone with nearly two decades of spell-slinging under their belt (pause for existential ennui), I hope you’ll find weight in my words when I say that Gladiator has offered some of the most engaging and intoxicating experiences I’ve ever come across.

For those of you not familiar with my typical jaunts across the Multiverse, they usually involve recycling a Black Lotus infinitely, lapping my opponents starting life total with a Berserk-fueled Managorger Hydra, or taking it easy with a cozy afternoon of Reveillark shenanigans. Detractors of mine (a.k.a. my friends, family, fellow Card Kingdom affiliates, the greater Magic community) tend to label me as a degenerate. So, when I sing the praises of a format primarily consisting of cards from the past half-decade, you know we’ve got a real banger on our hands.

“Two players enter, one player leaves, followed by the second player leaving as the match has concluded and the result should not affect the camaraderie between two individuals sharing common goals and passions.”
– Benjamin Wheeler, attempting eloquence and failing

So, what exactly IS Gladiator?

As of this post, expansions and core sets from Ixalan forward make up the bulk of the legal card pool, with the three Historic Anthologies providing fantastic support. Finally, the spattering of available MTGA New Player Experience cards and Historic-legal Brawl inclusions (e.g. Rhys the Redeemed) provide additional padding. Simply put, if you can own a copy in your Arena collection, it’s legal!

Well, except for cards on the banned list. Which is Oko, Thief of Crowns. Oko is banned.

But Why Is Oko Banned?

Few would argue against Oko being considered one of the most powerful cards of all time, and more accomplished players than I have done a better job explaining why. Within the context of Gladiator, during the formative “testing” period before going public, the budding community found Oko to be the most egregious example of key factors that go into format development and bannings.

While there are certainly cards that share these characteristics – some of which may just find themselves a home on the banned list in due time – the intention of the banned list is not to withhold opportunities for powerful Magic. Oko just happens to be the best at all of these, and by a large margin at that. So while the Thief of Crowns can’t participate in gladiatorial combat, the reader certainly can!

Gladiator is a community format. While there aren’t any official Gladiator queues built into the Arena client (yet, *wink wink*), I’m proud to say that in just over a month’s time, the official Gladiator Discord has catapulted to over 3500 members. With such an active community, there are endless opportunities to find pick-up matches, tournaments and leagues. Each has their own channel, and a team of tournament organizers and moderators to allow for a smooth experience. No matter the time zone, you’ll be able to jam Gladiator.

When looking to set up matches, you’re going to want to follow the settings below. These are with pick-up games in mind, with tournament stipulations/settings up to the discretion of the tournament organizer.

As for actually building your deck, Gladiator is a wide-open format, with all the classic archetypes in attendance. Quite honestly, the process looks something like this:

Congratulations, you’ve got yourself a Gladiator deck!

If you’re looking to jump right into gameplay, there are several deck list databases pinned on the Discord, and linked below will be my collection of Wheeler builds. But since you’ve been kind enough to read my first article, I’ll let you in on my personal favorite brews that provide a gameplay experience unique to Gladiator. (That’s my fancy way of saying, “Check out how shockingly powerful some of this draft chaff is!”)

During its time in Standard, I slapped countless copies of Curious Obsession onto unassuming blue creatures. In the early days, it was my archetype of choice for local PPTQ’s (good idea) and carried on as my RPTQ standby (not a good idea). It was only natural to recreate my pet deck for Gladiator, and by Thassa’s spear, does it ever fulfill that role! It also happens to do so for only $50, making it not only a competitive threat, but a great budget option with plenty of opportunities for customization.

You’re looking to develop efficient evasive threats, out-tempo the many board-based strategies with cheap disruption, and occasionally pivot to protecting your more impactful cards. While it seems straightforward – and, given the right draw, it can be – the real challenge kicks in when playing on the back foot. Even without sideboards, cards like Veil of Summer and Shifting Ceratops are perfectly serviceable, so be cautious while navigating games versus any opponents flaunting green mana.

This one I’m particularly proud of, mostly because it actually worked. Mardu Reanimator and the other various “Reanimator” variants outside of Abzan owe their existence to one of my favorite conversation starters: “Hey, wouldn’t it be funny if…?” What started out as a conversation about reanimating exclusively dragons (which would go on to become a shockingly competitive Jund deck) became a deck that could bridge the gap between castable threats and game-winning behemoths. Add the best removal in the format and a mana base capable of showcasing some of the most outstanding threats Gladiator has to offer and you’ve got yourself a clear path to glory.

You couldn’t ask for a better pitch. When Historic Anthology 3 was being previewed, I was giddy at the thought of playing Hondens in a format so near and dear to my heart. There were certainly naysayers – those unfamiliar with the capabilities of a full set of shrines. But those naysayers were quickly silenced with the announcement of powerhouses Enchantress’s Presence and Mirari’s Wake. Well, either that or just cleaning up matches left and right.

Enchantress proudly embodies the absurdity of what’s possible within Gladiator while also highlighting the unique opportunity that supplemental releases can bring to the format. It doesn’t stop with anthologies, as MTG Arena will be updated with the entirety of Amonkhet block and the upcoming Jumpstart throughout the summer. I know I’ve got my fingers crossed for Auriok Salvagers and the original Spellbombs making an appearance – and honestly, that kind of anticipation has been instrumental in the growth of the format.

As with all great formats, Gladiator more or less sells itself. The gameplay is fantastic, the community is a blessing, and the brewing potential has led me to stay up past my bedtime so many times that my husband has shouted at me that “Gladiator will still be there tomorrow!” So, if you like Magic: the Gathering and you dislike companions, you’ll like Gladiator.

But, if that isn’t enough, I’ll cover why the format came to be in the first place.

Right now, playing in-person tabletop Magic isn’t exactly the easiest or safest endeavor. While playing paper over webcam has become a popular alternative, not everyone has access to the equipment or staples required for certain older formats. Magic Online is another option, but take it from someone that spent the greater part of 2019 playing Magic Online as a job: it doesn’t always boast a user-friendly interface.

MTG Arena offers a free-to-play experience on the back of a smooth interface and plenty of weekly events to pump even more value into your account. While the system is far from perfect for 60-card formats, the singleton nature of Gladiator and the plethora of competitive budget alternatives allow for a broader audience, including those new to the platform. Even just completing portions of the tutorial and challenges provides you with a complete set of shock lands!

But it wasn’t just an issue of cost and familiarity. The gathering part of MTG was sorely lacking, and if the abundance of messages I’ve received are any indication, Gladiator has been the perfect catalyst for cultivating a passionate, inclusive community of Magic players worldwide.

Build a deck, join the community, and play the format. Check out one of my many Gladiator streams. Then tell me, are you not entertained? As one of the creators of Gladiator and the longest-tenured councillor for Canadian Highlander, Benjamin Wheeler is no stranger to 100-card formats. While he prefers his graveyards stacked and Lotuses black, he’s willing to saddle up with whatever needs breaking next. He’s known throughout the Magic community as The Premier Lands Pilot, as well as the Paul Rudd of LoadingReadyRun. For all your singleton questions, catch him streaming at twitch.tv/benjamin_wheeler or ask away at @BWheelerMTG.