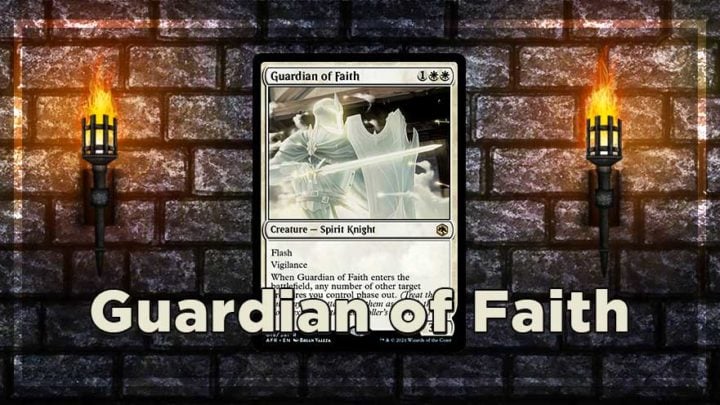 Adventures in the Forgotten Realms is a set that’s bound to get Dungeons & Dragons fans excited. So far, there have been some really great flavor wins, and the D20 dice-rolling mechanic is a fun way to bridge the gap between D&D and Magic.

As someone with only a passing interest in the D&D franchise, Adventures in the Forgotten Realms may as well just be another Magic set for me, and I know I’m not alone in that regard. I’m happy people are happy, don’t get me wrong — but what matters to me more are the cards in the set, and how I can use them.

Guardian of Faith was previewed toward the end of last week, and I knew immediately that this was an important card to talk about. To say there’s a dedicated contingent of mono-white fans is an understatement. As soon as this was posted, right on cue, my notifications blew up about this little gem.

Guardian of Faith is a 3/2 Spirit Knight for three mana, which is already respectable, given it has flash and vigilance. The thing we’re interested in here, though, is the “enter the battlefield” ability: when it enters play, any number of creatures you control phase out.

This card demonstrates a paradigm shift when it comes to white card design. It’s a fantastic example of contemporary design, and I love it.

One of the issues with playing aggressive decks in Standard is running out of cards. In the past, this hasn’t been a massive issue, as the decks you’d play against in the Rock-Paper-Scissors of Aggro-Control-Midrange eventually ran out of cards, too. Not every card used to replace itself or grant a two-for-one, and so the weakness of playing aggro wasn’t as apparent. Strong starts and not flooding out was often enough to win a game.

Fast forward to the current pace of Standard, however, and it’s a different story. It’s incredibly hard to run out of cards when most decks have numerous ways to refill their hand or otherwise top up incrementally as they execute their game plan. It’s either that or ramp hard into payoffs like Emergent Ultimatum or Ugin, the Spirit Dragon, which can invalidate everything that came before them.

While Standard might shift after rotation — we’ll lose Ugin, Cultivate, the Ultimatums, and all the value engines from Throne of Eldraine and Theros Beyond Death — we’ll still be left with the legacy of designing for Arena.

What that boils down to is cards are very rarely dead these days. Because Arena is often played in Best-of-One, we’re increasingly seeing new cards that either replace themselves by drawing a card, or that have different modes. Wizards wants to give the player as much of that “feel-good” as possible, so removing variance is key to implementing a game experience that people will want to return to.

Guardian of Faith, then, is a card that seems built for this environment. Blanking removal is one thing, but what flicker effects and hexproof effects (and sometimes indestructible effects) tend to be less good at is defending from all of the other removal types, like bounce, -X/-X, and mass exile.

By utilizing phasing, Guardian can dodge your creatures from an Ugin’s mass exile. It can leave +1/+1 counters on them. It can blank both single-target removal and wraths. It’s a powerful, flexible card.

I think it’s a happy accident that this translates into the exact kind of card we need for playing white in Commander.

Guardian of Board States

Like Teferi’s Protection before it, and a foretold Glorious Protector, Guardian of Faith joins the exclusive three-mana protection club in white. While there are also the likes of Eerie Interlude and Ghostway to consider for decks that enjoy flickering for ETB value (and Boros Charm or even Heroic Intervention in other colors), Guardian of Faith offers a new approach that has a lot of upside in Commander.

The first thing to note is how it’s the perfect size to be recurred from the graveyard. While it can be reused with an Ephemerate, what’s likely to happen is that, if the Guardian doesn’t get exiled to whatever effect you’re flashing it in to beat, it’ll end up dying to the wrath. While sorcery-speed recursion won’t be good for being reactive, it is good for being proactive — and sometimes that’s an option you’ll want to consider. Guardian can also be fetched with Recruiter of the Guard, which gives white an interesting option for their toolboxes.

The main draw for Commander is the opportunity to save your investments on board. While the recent Cosmic Intervention might again find a home in a dedicated deck, I’d say Guardian of Faith has more applications. Voltron decks in particular will really enjoy phasing out their fully-equipped beaters, as will Enchantress decks that have invested the even flimsier Auras and +1/+1 counters. Even flashing this in to save one creature will be worth it from time to time, especially since that protection lasts until your next turn.

There’s also something to be said for remaining in the game, compared to using Teferi’s Protection. While you can now be attacked, you will have at least one blocker, plus your enchantments and lands to play with. This opens up opportunities to make additional plays, which is pretty sweet. It also means your static effects can be left in play to continue to disrupt opponents.

I can see this card making its way into many creature-based white decks in Commander. But the fact it has relevant creature types will mean it’ll see even more play than just as a solid protection spell. Slotting into all manner of Knight and Spirit tribal decks means Guardian of Faith will show up a decent amount across the table.

For once, this effect seems made for white, rather than purely splashable like Teferi’s Protection or Smothering Tithe, which see play in many multicolor decks in the format. Two white mana symbols isn’t the restriction it used to be, but it is enough to push this card out of consideration in some builds.

There’s been a renaissance of sorts in recent white interaction, and I’m glad to see Guardian of Faith joining some other interesting additions to the arsenal. With Blacksmith’s Skill all but replacing Faith’s Shield, and Semester’s End adding to the options, we’re starting to see enough redundancy in effects that choosing what’s best for your deck is actually an option; there’s always some upside depending on your build.

Like Esper Sentinel, this is evidence of a concerted effort to fix the card advantage issue white has when it comes up against the value engines of other colors. We’re really starting to see those first pebbles form into the start of the avalanche now, and I’m really interested in where this might go.

I think the biggest takeaway here is that the rarity of a “good” white card seems a little lessened. We keep seeing hit after hit, and cards working in similar design space. Given that redundancy, it means I’m a little less hesitant to commit to any particular card in earnest, but way more excited to see what comes next. Guardian of Faith, though? I’ll take a playset.