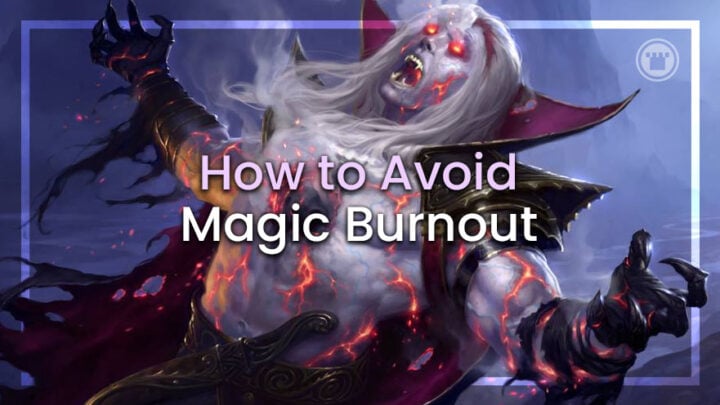 Burnout is normally something we think about in terms of a job. But burning out on a hobby, game or anything you regularly do for fun is a disturbing prospect. When even recreation can start feeling like a chore and the joy starts to slip away, it might mean you’re experiencing Magic burnout.

Happy holidays everyone! EMBRACE THE VOID.

All right, kidding aside, there’s two questions here: how do you keep from burning out on Magic and, if you already are, how do you reverse it? I can only write from my own experience, of course, but I’ve been playing this game for a long time (since at least second grade, and I’m 37 now), so there’s a lot to draw from.

We’ll start small and gradually work up to bigger ways to shake you out of a rut and back to enjoying something you ostensibly do for fun. Depending on what kind of Magic you play and what kind of player you are, not all of these might apply directly to you, but there should be something to glean from each segment.

If you’re getting that “stuck in a rut” feeling, trading wins back and forth but not feeling like you’re making any real progress as a player, try switching things up. Playing a different deck can give you a bit of a jolt. You stop playing off muscle memory and have to take a second and think about more decisions again.

Switching decks within a format has several benefits even outside of knocking you out of a rut. I believe there is no better way to know how to play against a deck than to play it yourself. You learn all its little tricks, how many lands it really needs to function and which cards to attack that might not seem terribly important at first glance.

And it can certainly shake you out of your normal play patterns. Are you a Control player by nature? Pilot the format’s aggro or stompy deck for a while and experience the joy of not having convoluted decision trees to navigate every game. If you are that Aggro player already, try out a combo deck.

The point is to pick something that offers a change in mindset — not necessarily the strongest deck (aside from what you were already playing, of course). Or, just pick a pet card and brew as hard as you can around it.

Find the silliest combo you can and try to make it work, even just once. Get those deck-building muscles in your brain working; you’ll never break the format if you don’t take some wild swings.

That above paragraph can also apply to you drafters out there. Force some meme decks. See if you can actually make some of those trash rares work for you.

Discover off-the-beaten-path archetypes and synergies. Draft seven of that 1/1 deathtoucher and watch your opponent’s disbelief as they have to start using premium removal on them to even have a hope of breaking through.

The point is to just try to find ways to break out of your normal patterns. I know I tend to draft the same kind of decks after a format has been out for a while, so giving myself stipulations going into a draft can certainly help keep things interesting.

Of course, sometimes it’s not the deck you play, but the entire metagame that feels stale. You’ve played the same matchups from both sides ad nauseum, and you find yourself just waiting for the next major shakeup to pique your interest again. A possible solution here? Switch to a completely different metagame, of course.

Are you a Standard player? Give Pioneer a shot. It’s not like a lot of the staples there are likely to go out of fashion that fast.

Normally prefer Modern? Given the way Wizards has been printing powerful cards over the last few years, you probably already have most of what you’d need for Standard anyway.

Give Commander a shot, or if you only play Commander, try to figure out what it is that people possibly see in sixty-card non-singleton decks anyway. Or, go with a smaller switch — jump from Commander to Canadian Highlander! This is where fringier formats shine, as they tend to be based around pre-established formats and don’t require too much adjusting (in some cases).

This also works perfectly well for Limited players. If the current draft set isn’t floating your boat, find the latest Cube queues on Magic Online (or find that Cube group at your friendly local game store) and give it a whirl.

Or, take all those cards you have lying around from Draft and build that Standard deck. If you’re a Constructed player, jump into a draft on Arena or at a random FNM. Go to a Prerelease and try to soak up the joy of the folks who are just super jazzed to play semi-casual Sealed with brand new cards.

The worst-case scenario here is you find out you really do prefer your original format, and you can go back to it with a fresh appreciation for what it has to offer. Best case, you discover a new favorite format, and your options of what kind of Magic to play gets that much wider.

Hold your horses — I’m not suggesting anyone give up Magic entirely. But, if you’ve noticed a theme in the above suggestions, it’s that broadening your horizons is a key factor in keeping your passions alive. Magic isn’t the only game out there, and it certainly isn’t the only hobby.

Everyone knows that Magic player in their friend group or at their shop who played the game for a while, quit for a span of multiple years and then picked it up again, diving in headfirst. Often that pattern has to do with kids “aging out” of their hobbies and then rediscovering them again years later, though not everyone falls into that category.

A lot of players will start to get into Magic, get to the point where they are just starting to invest more time and energy into it and then they’ll hit some sort of wall. Maybe they hit a skill plateau, maybe their format of choice goes through a rough period or maybe random life events take them out of the game for a bit.

Something about their interest in the game burns out and fades, and they move onto something else. Coming back to it is usually a matter of pure chance, but when they do, I’ve found they tend to make up for lost time by going all in on the type of Magic they like to play.

So, what I’m suggesting here is a small-scale, controlled version of that. Stop playing for a bit! How long that pause is will vary, and how much of an actual pause it is will also fluctuate from person to person. I know some folks who just can’t get into the flavor of a set and simply wait for the next time a plane makes them take notice.

Some folks will take a month off of trying to ladder up on Arena. I fall into this category — I’m still playing Magic right now, but nowhere near what I usually do, and have taken up finally trying to get better at chess.

This is the same concept as taking a vacation from a job. Plan for it a little and the experiment can be greatly rewarding, with the added bonus that what you’re coming back to is a fun, completely voluntary activity.

Magic is a fantastic game with a ton of depth and variation, and I’ll likely play it in one form or another for as long as I can.  And I’m sure that during that time, my level of investment in the game will wax and wane.

However, I’ve found that adopting the above strategies has helped me maximize the enjoyment I get out of what is, as I’m constantly reminding myself, a game I choose to play for fun. I hope these tips can help some of you out there keep your sense of joy in the game intact.