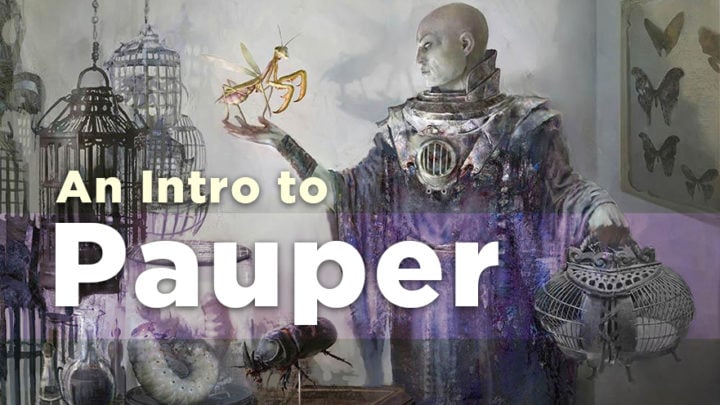 Pauper is one of Magic: The Gathering‘s longest-standing and most accessible competitive formats. As its name suggests, Pauper is a format played with only cards that have been printed at the common rarity, which makes decks incredibly affordable. But make no mistake: Pauper gameplay is incredibly challenging and rewarding, which makes it one of the best entry points to competitive play.

Here’s our friend The Professor from Tolarian Community College explaining why he loves Pauper:

Like all Magic formats, Pauper has a ban list that helps maintain the balance of power in the metagame. Here are the commons that have been banned from Pauper:

As of 2019, tabletop Pauper and Magic Online Pauper events all use the same ban list.

Now that we’ve covered the rules, let’s take a look at some of the decks you might see in a Pauper tournament. Delver of Secrets is one of the most powerful cards ever printed at common, and Delver decks have been dominant in Pauper since their namesake card entered the format. These spell-heavy decks play a disruptive beatdown game, filtering through their libraries to find the right spells to protect their threats. While the supporting cast has changed over the years, current Delver builds utilize Gurmag Angler and removal spells like Snuff Out and Echoing Decay. While Delver can play an aggro game, the premier beatdown deck in Pauper is Mono-Green Stompy. This deck can deploy efficient creatures quickly and power them up with Rancors and pump spells. Burn has been a popular budget deck for decades, and the Pauper version is just as potent as Burn decks in other formats. With Lightning Bolt, Searing Blaze, and Fireblast all available at common, this deck can whittle away life totals at lightning speed. The deck runs light on creatures, but Thermo-Alchemist provides valuable chip damage.