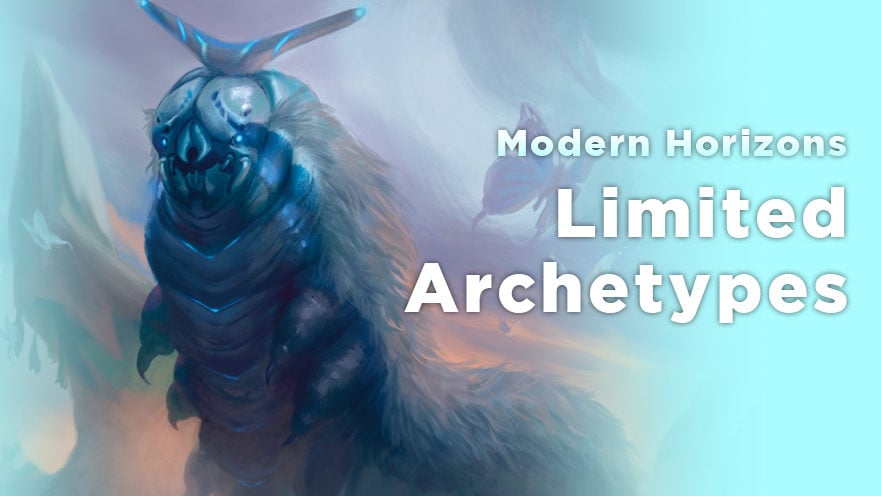 Let’s go through the ten two-color archetypes of Modern Horizons.

With valuable commons and uncommons like Ingenious Infiltrator, Moonblade Shinobi, Twisted Reflection and Smoke Shroud, UB Ninjutsu looks to be a deep archetype for both Draft and Sealed.

Evasive creatures are crucial in this archetype. Faerie Seer is a fantastic early play that can smooth out upcoming draws and enable Ninjutsu later. Changeling Outcast, Gluttonous Slug, and Eyekite are more great enablers, and Changeling Outcast is a Ninja, too!

While you will usually want to activate your Ninjas’ Ninjutsu abilities, it’s important to identify when it would be better to cast them. Consider casting your Ninjas if you don’t have another creature in hand or in play.

The UW archetype takes advantage of creatures with “enter the battlefield” effects. This archetype largely revolves around its multicolored uncommon, Soulherder, which allows you to “blink” your creatures for value. One or two end-steps with Soulherder in play and a Vesperlark, Pondering Mage, Watcher for Tomorrow or Man-o’-War will give you an advantage.

The spells you’ll want most in this deck are cards like Ephemerate and String of Disappearances, which both do a great Soulherder impression in a pinch. You can also use both modes of Settle Beyond Reality, one of the best removal spells in the set. Additionally, Answered Prayers fits into this archetype well, giving you some solid life-gain and a bonus 3/3 flyer whenever one of your creatures enters the battlefield.

Slivers are back in Modern Horizons, and you’re most likely to find them in red and white. Slivers and known for their synergies, and this strategy is capable of buffing up its creatures while going wide. Lancer Sliver, Cleaving Sliver and First Sliver’s Chosen are the most important Slivers in combat, and Lavabelly Sliver and Bladeback Sliver are great inevitability engines when the ground gets clogged up (as it often does).

This strategy gets a great deal of support from white changelings like Impostor of the Sixth Pride and Irregular Cohort. Aggressive tricks like Volatile Claws, Goblin War Party and Goatnap also gain value in this deck. It can also be worth splashing black for cards like Smiting Helix, Etchings of the Chosen and even more changelings.

Speaking of clogging up the board, there’s one archetype that can do that better than any other. Green-White is defined by its multicolored uncommon, Good-Fortune Unicorn, but there are other “creatures-entering-the-battlefield-matters” cards to look out for (such as Saddled Rimestag, Zhalfirin Decoy, and Bellowing Elk).

If you get a chance to play this archetype, remember that your token creatures count as creatures entering the battlefield! That means that cards like Squirrel Nest, Twin-Silk Spider, Trumpeting Herd, Mother Bear, Answered Prayers and Battle Screech become even more valuable.

Stalemates are common in this format, so be sure to prioritize mass-pump effects, such as Scale Up, Stirring Address, Knight of Old Benalia, and Rhox Veteran. You’ll also want a few pieces of removal or tricks – this is one of the best decks for Savage Swipe, and you can’t go wrong with Settle Beyond Reality.

One of the most powerful strategies in Modern Horizons Draft is UG Snow. This deck relies heavily on permanents with the Snow supertype, such as the snow-covered basic lands you’ll find in each pack. In Sealed, however, the archetype is much less viable, as it’s harder to hit the critical mass of Snow needed for that avalanche.

This deck is very straightforward (the more Snow permanents, the better!), and your payoffs include cards like Blizzard Strix, Winter’s Rest, Frostwalla, Conifer Wurm, and, of course, Abominable Treefolk. Rime Tender is a great addition to this archetype – it can untap a Snow-covered land if you need two mana of a single color, and it can untap your biggest attacker post-combat – and Springbloom Druid can help tutor up additional Snow-covered lands.

When drafting, you will likely need to pick up Snow-covered lands early and often. If you’re not seeing the Forests or Islands that you need, don’t be afraid to include a few of the off-color lands to help increase your snow count.

Springbloom Druid pulls its weight in the Snow deck, but it also plays an important role in the Red-Green archetype. Cards such as Igneous Elemental, Ruination Rioter, Ore-Scale Guardian, and Murasa Behemoth get stronger if you have lands in your graveyard. Luckily, with the inclusion of cycling lands and cards like Lava Dart, Excavating Anurid, Nantuko Cultivator, Winding Way, and even Lesser Masticore, getting the lands in the bin is not too difficult.

When building or drafting this archetype, it’s important to keep track of how many enablers and payoffs you have, respectively. It’s also important not to forget the removal and combat tricks available in Red and Green. Cards like Savage Swipe and Pyrophobia can help get you to the late game where you can begin running out your big threats. Magmatic Sinkhole also shines in this deck, especially if you’ve been filling up your graveyard with lands.

Thundering Djinn tells us what we want to do with Red and Blue: draw cards and deal damage. This archetype doesn’t have a lot of cross-over with other strategies, but that means you’re likely to get payoffs late in the draft if this strategy is open. Eyekite is of particular importance – it’s aggressively costed and has evasion – but Spinehorn Minotaur and Oneirophage are great pickups for this deck, too.

But Chantelle, you ask, how am I drawing all these cards? Modern Horizons has you covered with a variety of “draw a card” effects. Cards like Everdream, Fists of Flame, Rain of Revelation, Scour All Possibilities, and Phantasmal Form all allow you to draw cards, and the cycling lands are a big help, too.

Good news for players looking to draft this deck: you don’t need a ton of payoffs to make this archetype work. You’ll be drawing more cards than your opponents, so you’ll be more likely to see the cards you want!

Another important tribe in this limited format is an old favorite of mine: Goblins. In both Black and Red, cards like Goblin War Party and Sling-Gang Lieutenant crowd the board with creatures and power up Munitions Expert. Goblin Matron can help fetch up any of these pieces, as well as any valuable black changelings like Venomous Changeling that you might be looking to cast. (Remember, they’re Goblins, too!) When you have so many 1/1’s in play, cards like Mob become even easier to cast, and anthem effects like Volatile Claws become increasingly valuable.

However, cards like Bogardan Dragonheart, Carrion Feeder, and Silumgar Scavenger don’t really care whether your creatures are Goblins or not – they just want you to make sacrifices! Fortunately, you can do a great job of sacrificing creatures in this color pair, and cards like Rank Officer and Warteye Witch provide additional support. There’s no better feeling than Goatnapping an opponent’s creature and then devouring it with a Feaster of Fools.

BG “Creatures in the ’Yard”

While RG cared about having lands in the graveyard, BG is all about seeing creatures in the bin. This is much easier to achieve, as creatures are more likely to go to the graveyard over the course of the game, but Ransack the Lab and Winding Way help speed up the process. You can also discard creatures to cards like Rank Officer and Lesser Masticore – Mother Bear and First-Sphere Gargantua are particularly good candidates. Krosan Tusker is another great inclusion, since it helps you ramp in the early game and serves as another creature in the graveyard.

But what benefit do you get from having creatures in your graveyard? Cards like Rank Officer and the multicolor uncommon, Rotwidow Pack, let you exile creatures from your graveyard to affect the game. There are also cards that just care about the total number of cards in your graveyard, such as Webweaver Changeling, Nimble Mongoose, and Excavating Anurid. And in the late game, you have access to cards like Return from Extinction, Unearth and even Graveshifter, so you can get those creatures back!

Changelings aren’t just useful in the Slivers, Goblins, and Ninjutsu decks – they also get their own archetype! In my opinion, the most important cards for this archetype are Valiant Changeling (a 3/3 double striker that can cost as little as two white mana), Etchings of the Chosen (you can name any creature type), and King of the Pride (because your changelings are also cats).

It’s important to remember that being a changeling is a two-way street. Your changelings can always be Goatnapped, and they wither in the face of a Plague Engineer no matter what creature type your opponent names. I’ve found that changelings work best in a support role in other archetypes, especially in Sealed.

Overall, this limited format has been a blast to learn and play, and I’ve only scratched the surface with this archetype breakdown. If you’re at MagicFest Seattle this weekend, please stop by and say hi, and tell me what you’ve been enjoying about Modern Horizons so far!