Commander is a challenging format for deckbuilding. There are many moving parts and so many possibilities that it’s natural to look for some guidance. But as Commander continues to grow, we are reaching a situation where there is so much information available that many different decks are being built from the same template, making them feel more similar than ever before. Mono-colored decks suffer the worst, as the constraints of the color pie limit options for each color. This is why playing against so many green decks feels a bit like playing against any other green deck. (Sorry, green players, I don’t mean to hate on you — I just built a Mono-Green commander deck!)

Luckily, we have a color that stands like Batman on a gargoyle in a thunderstorm. Mono-Red is not only the hero we need, but the hero we deserve. Here is a brief list of the archetypes available to red in Commander.

*Okay, every color has tribes, but red’s are worth talking about.

There are so many different red decks available, and so many variations within each category. Let’s break them all down and see what that means. Burn is a quintessential piece of red’s color pie so it’s natural to see several commanders support this strategy. You have the speedrunner Heartless Hidetsugu with plenty of rituals, mana rocks, and just a few ways to finish the game out. Hidetsugu deals damage fast and hard. But if you want more options, Jaya Ballard, Task Mage has your back. The original Jaya slices, dices, and makes julienne fries. Casting Inferno every single turn is amazingly good.

The best thing about burn cards is that they often function as counterspells. Sure, Latulla can’t technically counter a spell, but if you take out an opponent with their spell on the stack, then that spell is removed from the game. Also, don’t forget that each burn spell makes the next burn spell even more potent. Earthquake for five damage is pretty much a board wipe and a dent to everyone; follow that up with Fault Line, Rolling Earthquake, Molten Disaster, or even Breath of Darigaaz, and now a whole table is on the back foot. Life as a resource works until you can’t spend that resource. Red plays very well with artifacts. Red now has some of the best non-combo based artifact decks. Daretti, Scrap Savant; Slobad, Goblin Tinkerer; Bosh, Iron Golem; Pia and Kiran Nalaar; Pia Nalaar; and Kurkesh, Onnake Ancient are excellent for artifact-focused decks. What is most exciting from a deckbuilding perspective is the breadth of card choices for these decks. Bosh and Pia and Kiran and Slobad want to sacrifice artifacts for very different purposes. Slobad is either for value engines or defensive play, Bosh wants to sacrifice huge artifacts to do as much damage as possible, and Pia and Kiran care more about small artifacts and finding ways to make that small damage count.

These decks have aggressive options, combo options, controlling options, value engine options, and even token plans. When you add mana rocks, card drawing artifacts, and the Junk Diver family of cards, the red decks pack a serious punch. Leaning into artifacts shores up the inherent red weakness of struggling against enchantments. Do you like Zerg rush strategies? Red has you covered. The most prominent tokens generals are Purphoros, God of the Forge and Krenko, Mob Boss: two of the three most popular mono-red Commanders on EDHREC. Red has lots of ways to give haste and turn tokens into damage straight to an opponent’s face. Impact Tremors and Purphoros are among the most popular, but Goblin Bombardment and Warstorm Surge are fantastic tools as well. With just a tiny bit of work, red token decks can easily match a mono-white or green-white token deck for raw damage output.

But what if you want to swing with the tokens or have them do more in a game? Varchild, Betrayer of Kjeldor rewards your for smashing faces AND you gain a whole host of tokens when Varchild leaves the battlefield. Homura, Human Ascendant is an underrated card in Commander that can easily give your entire team Shiv’s Embrace. (If Elspeth, Sun’s Champion’s ultimate is scary, imagine a red deck that adds firebreathing to that effect from the graveyard.) Urabrask the Hidden slows down all your opponents while making sure you have the fastest tokens on the battlefield. Valduk, Keeper of the Flame combines a mass token strategy with the Voltron strategy we all know and love in Commander. Every color has tribal options, but few colors have as many iconic fantasy tribes as red. Goblins and dragons are both iconic fantasy creatures, and they’re among the strongest tribes in Magic. Goblins commonly run Krenko, Mob Boss for the swarm approach, but Ib Halfheart can be interesting to give opponents terrible blocking decisions. Dragons decks are likely to run Lathiss, Dragon Queen for tokens or Zirilan of the Claw for cheating out sneaky dragons. Lovisa Coldeyes is another super tribal creature who boosts barbarians, berserkers and warriors to give your children of Skyrim a quick clock to knock out a control player or the whole table with some extra combat phases. The Voltron plan is where you power up your commander with equipment and auras to kill with commander damage, based on the five lions coming together to form the legendary defender. Voltron Commander decks want to deal lots of damage, fast. Since red is historically Magic’s fastest color, red Commander decks are the perfect place to incorporate this strategy. Godo, Bandit Warlord was infamous in the earlier days of Commander, but almost any commander can be given enough equipment to turn into the legendary defender. I prefer lean commanders like Varchild, Betrayer of Kjeldor or Ashling the Pilgrim for a Voltron plan, since their abilities let you pivot when the commander damage option is looking grim. 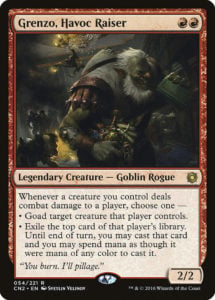 There are many aggressive and beatdown-style decks in red. In addition to the tribal options we discussed, commanders like Grenzo, Havoc Raiser and Zada, Hedron Grinder can play an aggressive yet highly disruptive game with combo potential. Don’t underestimate goad on a bunch of fast critters or Expedite to draw something like eight cards — take that, blue!

An underrated option in aggressive decks is the power of a wheel. Wheel of Fortune effects can help a little red deck reload and cause some opponents to completely rewrite their game plan. One of the most frustrating decks to play against is the chaos archetype. If you ever see Norin the Wary, then be ready. Diaochan, Artful Beauty and Etali, Primal Storm are other strong candidates. The ability to slam down a Confusion in the Ranks and then cast Warp World is not to be underestimated.

The chaos deck focuses on causing mayhem and forcing the table to play a new game. Possibility Storm is a marquee card for this strategy, though Confusion in the Ranks causes a similar challenge. But it isn’t always about stopping the permanents — Diaochan will often cause you to destroy your own creatures or to wreck an opponent when you are trying to accomplish something else. Despite the giggles, no one should ever play Grip of Chaos. Friends don’t let friends cast Grip of Chaos. I’ve hit the highlights to encourage you to think about mono-red in a new way. But red has more tools than conventional wisdom suggests. Control options are entirely possible within a mono-red deck; you can play combo decks, with or without artifacts; even Reanimator is within the realm of possibility.

Remember not to abandon your Commander fundamentals when making a mono-red deck. You will still need ramp and card draw and answers to the biggest problems. I highly suggest looking to use some copy spells as a way to get around counters or to piggyback off someone else’s hard work.

The biggest challenge will be handling the things red struggles with most: enchantments and big creatures. Catch-all answers do exist, including Chaos Warp, Scour from Existence, Unstable Obelisk, Meteor Golem, Universal Solvent, and sweepers like Oblivion Stone and Nevinyrral’s Disk. You don’t need all of these, but having more than one catch all answer provides an out when something horrible hits the table.

Now that I’ve challenged the adage that mono red decks are bad in Commander it is time to go fourth and build! Let me know what mono red options you have done, the coolest parts of them, and what awesome strategies I missed. If you have a list, hit us up on Twitter at @Card_Kingdom to share your approach to the best mono color in Commander!