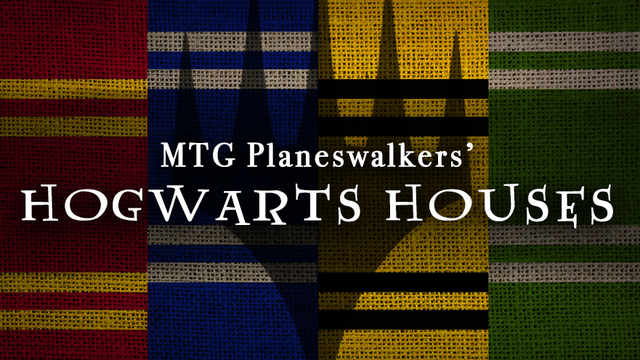 Until recently, I considered myself a quintessential Harry Potter fan. A “Potterhead” who knew everything from the conversion rates of sickles to galleons (17 to 1), to the wand wood of Ollivander himself (hornbeam), to the Hogwarts House of Moaning Myrtle (Ravenclaw). I even have my own custom designed wand (also made of hornbeam).

Before I started playing Magic: The Gathering, I didn’t have many other wells of deep fantasy lore locked away in my brain. But once I learned to play Magic, I found myself unable to stop. And now that both wellsprings of knowledge are jostling around in my noggin, it only makes sense to do what needs to be done:

Sort all 36 Planeswalkers in War of the Spark into their respective Hogwarts Houses.

I tend to sort people and characters based on what motivates them, borrowing heavily from the famous Sorting Hat Chats on Tumblr. What drives this character to take the actions they do? What values do they have at their core, and how do they execute on their ideas? These are the questions I have in mind when considering each planeswalker, and like the Sorting Hat itself, there are always possibilities to keep in mind.

But we’ve got a lot of names to call, so let’s start with the biggest, brashest house – Gryffindor!

Gryffindor: Leading With Your Heart

Gryffindors are known for strong, moral center. They intuitively and instinctively know what is right, and will act on those values swiftly and decisively no matter what the cost. Out of all the houses, Gryffindors are most likely to sacrifice everything in order to do what they believe is best – friends, security and even themselves. This doesn’t necessarily mean that Gryffindors are always righteous or correct. It simply means they are more likely to *believe* that they are correct because of their gut morality.

At the core of every Ravenclaw is a love of learning. Knowledge – both acquisition and application – is the creed of a Ravenclaw, constantly building internal hypotheses and testing them against new findings. While Ravenclaws tend to be the most intellectually minded, it doesn’t mean they aren’t bereft of emotions or passion. Rather, a Ravenclaw will take their gut reaction and measure it against what they believe to be correct, based on a glut of evidence. Ravenclaws seek not just a subjective truth, but the objective truth, and will not hesitate to throw out old ideas if something new and irrefutable contradicts them.

Hufflepuffs are often the most overlooked and underestimated denizens of Hogwarts. But like the tenacious and feisty honey badger, Hufflepuffs will not hesitate to defend the communities and people they love if they are threatened. More than the other houses, Hufflepuffs are committed to the well being of their community, making sure that no one is left behind and that the most vulnerable members are taken care of. They are even handed and honest, prioritizing the dignity of every person they meet. Hufflepuffs will not hesitate to compromise their own well being for the good of their community, looking at the bigger picture rather than focusing only on a few members.

Slytherin: Me, Myself and I

Despite their many schemes and machinations, Slytherins are a fairly simple House to understand: “Me First”. Slytherins will unflinchingly set boundaries with people, and have no shame in fully expressing their preferences and pursuing their ambitions. A Slytherin’s greatest strength is complete knowledge of who they are, and doing whatever it takes to be true to themselves. However, this doesn’t mean Slytherins don’t care about others. Like Hufflepuffs, Slytherins do show deep loyalty – but only to the few select people they choose. Cross a Slytherin or their chosen, and you’ll face a wrath that is single-minded and vindictive in its execution.

I’m sure that a lot of folks will have their own opinions on where all of these planeswalkers would be sorted. However, I think we can all agree that each one of these characters brings something new, insightful and epic to the game. As with the Wizarding World, the Multiverse is a large, multifaceted place, and it’s always fun to see how these fantasy worlds interact.  As War of the Spark unfolds, I look forward to seeing how they evolve, what their fate may be, and where they’ll go next!