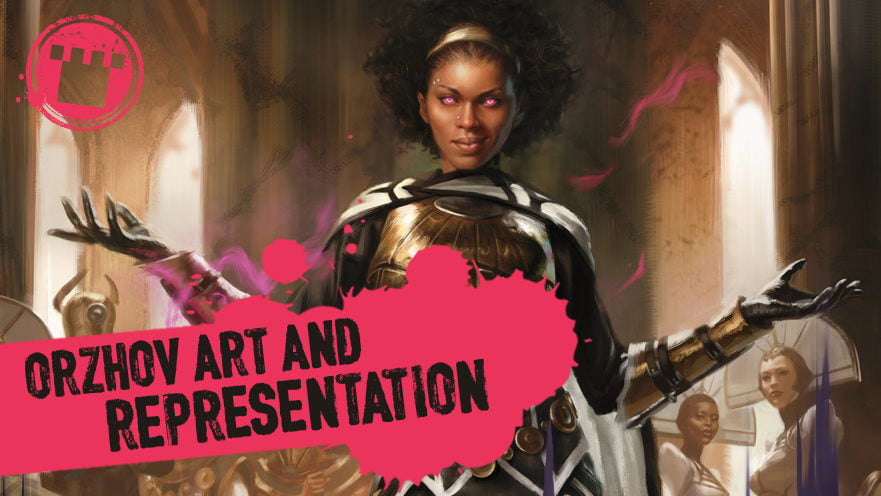 The plane of Ravnica has captured our imaginations for almost fifteen years. Ravnica is covered in urban life, and it reflects the glorious and grotesque realities of city living, from abject poverty to opulence and power.

Cities change over time, and Ravnica is no exception. Despite the rapid evolution of the Simic or the ingenious inventions of the Izzet, it’s surprisingly the Orzhov that has changed the most in terms of representation and diversity. Once a guild of bloated priests and decadent corpses, the Orzhov of today heralds sweeping change to its ancient debt-fueled structure.

Let’s take a closer look at the representation of the Orzhov over time, from their debut in Guildpact to our most recent trip to Ravnica in Allegiance!

The Orzhov Syndicate was introduced in Guildpact as the Ravnican White/Black guild – an amoral combination of crime, corruption, and piety. Portrayed as a decaying, opulent religious organization, Orzhov combines the avarice and power-driven goals of Black with the structure and order of White. Syndicate leaders take their riches and social status with them into the afterlife, with the ghostly Obzedat council leading and embodying this principle.

In its earliest incarnation in Guildpact, the Orzhov were illustrated as mostly male-presenting, white, fat and nefarious figures. This visual shorthand takes advantage of the harmful stereotypes large people face – lazy, unattractive, grotesque. Orzhov Pontiff, Revenant Patriarch, and Castigate are prime examples of this.

Portrayed as large, imposing men with exaggerated features, the leaders of the Orzhov loom threateningly over their victims, dressed in flowing robes and grimacing. The Obzedat themselves are no different: the main character in the art also is an obese, shadowy, male-presenting spirit.

While there are women and female-presenting figures in the Orzhov, their costuming is quite different from that of their male counterparts. Teysa, Orzhov Scion wears a black gown that exposes her cleavage. The Orzhov-aligned Angel of Despair also sports an impractical upper chest opening in her bodysuit; instead of armor, she has a loincloth with high slits along her thighs. While both characters hold authority within the guild, their art emphasizes their sexuality over their power.

The visual message is clear: Large white men – alive or dead – dominate in the Orzhov guild; female-presenting guild members may hold power, but they must also serve as eye candy. The guild does not afford women the same respect and power, and progress seems unlikely under the Obzedat’s everlasting reign.

When next we return to Ravnica, we see the Orzhov slowly start to change. There are fewer large, villainous leaders of the Syndicate, with some notable exceptions. The art for Maw of Obzedat is an almost satirical picture, with penitents jumping into the belly of a morbidly obese thrull.

The Obzedat still rule the guild, and they’re more opulent and sinister than ever before. Judging by images of other guild officials – such as Vizkopa Confessor and High Priest of Penance – the Orzhov leadership remains older, male, and white.

While the Orzhov has stayed true to its “corrupt church” aesthetic, the women of the guild are presented differently. Teysa Karlov returns in another skin-tight outfit, but her pose isn’t necessarily sexual. In her hand, we finally see her cane, a reminder of her disability. Relaxed in her chair, her composure is regal and pensive.

Similarly, we see Tithe Drinker on her throne. Dressed in another impractical, chest-baring gown, this vampire projects sensuality, opulence and power. While she is attractive, her position clearly communicates a sense of menacing authority.

Cartel Aristocrat also looks regal as she looks down her nose at the viewer. With her 80’s shoulderpads and fan-like headdress, this Orzhov guild member projects an image of power.

While Orzhov women are portrayed with more dignity in Gatecrash, the status quo from Guildpact remains firmly in place. We also see a lack of racial diversity among the Orzhov: nowhere in its ranks do we see people of color. It is unclear whether non-white individuals are part of the Syndicate at all, and if so, what part they play.

Ravnica Allegiance represents a sea change in the way women and people of color are depicted in the Orzhov. Nowhere is this more obvious than the image of Kaya, Orzhov Usurper, who confidently strides toward the viewer
in her new guild regalia. Kaya’s hair is natural, and her outfit is practical but refined. Gold coins and accents decorate her new robes; clearly, she is a person of wealth and high rank.

Behind her are Syndicate members of different genders and ethnicities. A black woman in the white dress of the Cartel Aristocrat gazes outward; a black man moves his golden mask aside.

In this one picture, we clearly see what the Orzhov has become: a woman-led, diverse community working toward affluence, order and power. It is a far cry from the old Obzedat, their malformed, decaying spirits clutching their established status. In fact, there is only one piece of art in the set that portrays a bloated form reminiscent of the ghostly Obzedat:

Clearly, the reign of these ghostly patriarchs has ended.

The rest of the Orzhov Syndicate appears equally diverse. Teysa and her female colleagues have upgraded to the flowing robes reminiscent of priests and judges. Pictured with her signature cane, Teysa quietly smiles, bedecked in coins and sumptuous fabric.

Orzhov angels, clerics and vampires have also enjoyed a wardrobe change, sporting flowing damask robes and sensible necklines. All of these pieces pull the focus to the subjects’ faces rather than their figures, highlighting their confident poses.

These characters have depth, agency and skill – even the small boy on Ill-Gotten Inheritance seems sinister in his own way. Wizards is clearly choosing an art direction that represents the different faces and perspectives of a huge city like Ravnica.

Ravnica is one of the most diverse planes in the Multiverse, with wraiths, homunculi, goblins and minotaurs often occupying the same street. With Ravnica Allegiance, the city-plane finally shows a more realistic picture of the populace, including strong women and non-white characters. Perhaps soon we’ll also see more positive portrayals of people of size as well.

While this may seem insignificant to many Magic players, there are even more out there who have always wanted to see themselves in the game. Present-day Magic not only captures the best of game design – it also shows the breadth of human existence.