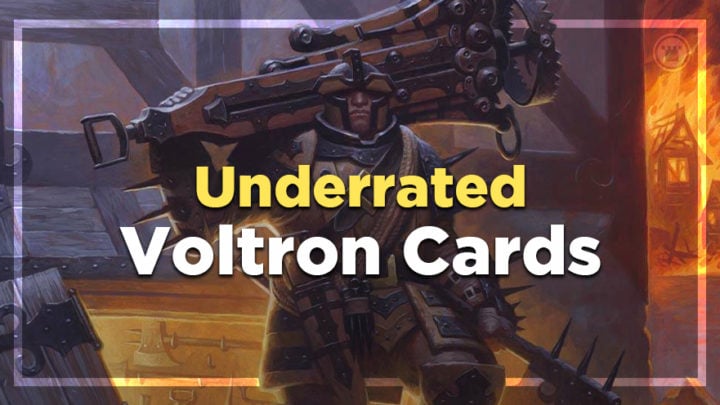 Voltron is a fan favorite when it comes to EDH. We all love casting haymakers and equipping them with legendary Equipment, but what cards might have flown under your radar? Today, Kristen has a few picks worth considering.

There’s something supremely satisfying about strapping up a sizable soldier, and I have to admit that Voltron has always been one of my personal pet strategies. For a long time, the archetype has been somewhat of an underdog, mainly seeing results when combined with other strategies. Think Geist of Saint Traft or Sigarda with some pillowfort; Ishai, Ojutai Dragonspeaker and Jeska, Thrice Reborn with a reactive and controlling game plan; or Akiri, Line-Slinger shutting a game down before it even starts.

Syr Gwyn, Hero of Ashvale is one of my pet choices, and I actually shied away from the deck not long after it came out. It was printed around the time when it became clear that Commander had sped up a little, and I felt like she just didn’t cut it in that meta. Fast forward to today, and I’m hyped to sit down and play with her again. Beyond the upgrades from Commander Legends, we’ve had some seriously great staples printed in recent sets.

Blacksmith’s Skill is one such card, and has single-handedly piqued interest in the archetype again for many players. In fact, I’d go as far as to say Voltron has never been better. Revitalizing how good Voltron can be means it’s a great time to dig into some lesser-played cards.

The gold-standard for me when it comes to Voltron decks are:

To this day, I think Remorseful Cleric and Selfless Spirit are two of the best, regardless of what tribe, colors, or sub-strategy you’re using.

I’ve also added Reidane, God of the Worthy to this list. Like the Spirits, Reidane is the perfect creature to wear early-game Equipment like Sword of the Animist or Mask of Memory. Flying is one thing, but vigilance is even better; even if the card had no further text, that would be compelling enough. When you consider how great her abilities are, you can see why this card is so great. Whether you’re stopping board wipes on the front, or taxing interaction and reducing damage on the back, Reidane is a slam dunk of a creature that I still don’t see often enough.

Next up, some less obvious creatures that slot right into Voltron that you might not have considered.

Sylvia has the magic words “double strike” at three mana, and that’s something you can’t undervalue. A lot of the best Equipment triggers on damage.

Indulging Patrician fits right at home in a Snapdax, Apex Predator deck, but few might consider it outside of that. It handily ticks the aforementioned boxes (flying, mana value 3), and can help to keep opposing life totals down so you can more readily convert kills.

Shimmer Dragon, on the other hand, is a top end card that sees way less play than it should. I’m going to go one step further here and suggest it’s obvious top end for blue-based Voltron decks. People aren’t reluctant to play six- and seven-mana creatures in Voltron, but Shimmer Dragon should see more play here. It draws cards by tapping Equipment, and it’s hexproof a good amount of the time.

As for legendary creatures to try, I’m not sure why more people have cottoned on to Breena fulfilling a similar role as Ishai, Ojutai Dragonspeaker. Taking a slightly slower and more methodical approach to Voltron can be rewarding, and pushing Breena into those Swiftfoot Boots is an idea with a lot of merit. Light of Promise works pretty good in Orzhov, after all.

Lathril, Blade of Elves is an unlikely Voltron commander, but hear me out. Evasion on a commander is half the battle, and being in green opens you up to excellent Voltron pieces like Thrun, the Last Troll and Troll Ascetic. So, what do we do with the tokens? Well, aside from Grave Pact effects, throwing them into an Attrition or Mind Slash is delightfully devilish.

Menace is good, and so Kels, Fight Fixer is my final shout here. My good friend Chris von Doom once schooled me with a Kels Voltron deck, and I haven’t seen one since. The opportunity to play with Aristocrats and Cranial Plating is one I’m not sure many people can resist.

Evasion is the key to a good Voltron deck. While the sheer potential of Sword of Hearth and Home and Sword of Feast and Famine will steer you toward these powerful game pieces, it’s the lesser Equipment that’ll do most of the heavy lifting for you.

Fleetfeather Sandals is one of my cards of choice when it comes to Voltron, as flying and haste are arguably the two best keywords for this strategy. Not far behind is trample, and Sword of Vengeance and Tenza, Godo’s Maul are both picks I think should see far more play — especially now that we have more ways to make equip costs free than ever before.

Speaking of free equips, I’m of the opinion that more players should be enjoying Lucille and Heartseeker. I can understand the slow uptake on Lucille due to the controversy, but I’m sure you can get a good alter or Altersleeve to help ground the weapon in fantasy. The effect is very, very good. Heartseeker has long been a mainstay of Syr Gwyn, but again — with the likes of Halvar and Ardenn, there’s a lot of argument for this card to see more play.

Finally, some cheap mana generation. Mana wins games, and any form of mana generation that fits within your main strategy is mana generation I’m a fan of. One With Nature is great in green and Enchantress-based builds, and Goldvein Pick can help you stock up mana for later. I’ve seen more Explorer’s Scope recently, but I think I’d take the Pick over it unless I was in control of my top deck.

Ugin gets a line all to himself here. He deserves it, after all. You might think I’d be done campaigning for this planeswalker now that he’s seeing play in nearly 10% of Equipment-based decks. Well, you’d be wrong. When you consider Nahiri, Storm of Stone and Tamiyo, Field Researcher see more play? There’s something wrong.

Ugin is a ritual of sorts for Equipment- and artifact-based Voltron builds. By dropping him, you’re often able to guarantee emptying your hand. This works very effectively, considering you won’t always have free equips available. And that’s not to mention the Vindicate effect and card advantage bundled in. I’d say this is close to an auto-include, if I’m completely honest.

There’s also something to be said for enabling yourself in a flexible way. Duelist’s Heritage can target opponents’ creatures, helping you shred life totals even quicker. Muddle the Mixture is a counterspell that can find the likes of Blackblade Reforged, Lightning Greaves and Blazing Sunsteel. Odric can help your tokens and other small creatures benefit from your main beater, giving the option to go wide.

Sometimes, though, you’ll just need that little extra to close a game. While something like Chandra’s Ignition might be a good shout, it can be a little hard to pull off, given it’s a sorcery. If you’re looking for a similar effect, I really like Kazuul’s Fury. It can enter as a tapped red source, or serve as a way to convert your commander into extra damage.

Likewise, I’m a big fan of the double-tap with Aetherflux Reservoir. If you at all care about lifegain (or you’re just running Shadowspear and Loxodon Warhammer), then this can be a reliable way to take out another opponent after dispatching one.

Finally, Chance for Glory. This one’s a little risky, sure, but it can be searched up with Sunforger. It’s a cheeky way to get that one extra turn you need to kill a control player before they untap.

I spoke about how I really enjoyed playing the likes of Remember the Fallen and Animate Dead in my Syr Gwyn list, and with Reconstruct History, there’s now more reason than ever to run a greater variety of spells.

First up, a little backup for if plans go awry. High Market should be in most Voltron decks, given it allows you to escape exile or bounce removal when you have some form of recursion ready to go. Momentous Fall puts all chips in on that notion, giving you a way to not only draw a bunch of cards, but also gain some life when the inevitable happens — because it will. Even if you are running Deflecting Swat and Teferi’s Protection.

Hyena Umbra, meanwhile, is a piece of armor that’s cheap to play and easy to recur, with a relevant keyword to boot. Dodging a wrath is always good, especially when it only costs you one mana. Kaya’s Ghostform is also good here, though not quite as good, given the creature will leave play — dropping off all Equipment, and losing all other Auras.

If you regularly have menace, Alpha Authority essentially offers unblockable. Paired with Lathril, it can do some real work, and can also just be a swell Aura to run in a non-Enchantress deck. I think Auras are underrated, and have more to say about that here.

Flaring Pain is one that’s pretty nice to have if your local groups are wise to your aggro style. Getting two shots at it is nice, particularly if you draw and discard a lot of cards. Destructive Urge, on the other hand, is one that can punish just one player for ramping — the sweet spot.

At the end of the day, the biggest wrench in a Voltron deck’s plans are fog effects. Spires of Orazca, Maze of Ith, Glacial Chasm, Spore Frog… it’s enough to make the blood boil, isn’t it? If you find you’re having trouble, there are some cards you should definitely be playing. The first is Pithing Needle, which can stop activations of on-board tricks like Spore Frog. It has the upside of handily stopping planeswalkers, Aetherflux Reservoir and Golos, so that’s cool, too.

If you really want to raze the stakes, jam some Volcanic Offering or the new Obsidian Charmaw. Destroying problem lands is a way to get that damage through, and with some clever table politics, you can make that Volcanic Offering pretty darn impactful. Charmaw is just a two-mana evasive creature most of the time, with a relevant ability. I guess that brings us full circle, doesn’t it?

Voltron is a fun playstyle, but one that can take a little refinement to produce reliable results. We’ve had a bunch of incredible new cards printed in recent sets, but it’s often the less splashy and less obvious cards that truly help a Voltron deck perform. What Voltron decks have you been piloting recently? Let me know on Twitter.