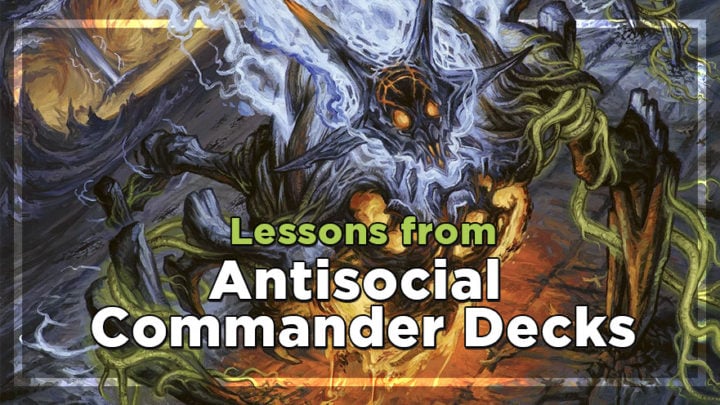 Sometimes, it can be useful to look outside of your comfort zone for inspiration. There’s a lot to learn from playing decks that aren’t your usual type, and today, I’m going to share my experience playing one of the most groan-inducing decks to sit across from: Maelstrom Wanderer.

I’ll be honest — I’ve never really been the kind of person to build a Temur deck. There’s something about playing with blue and green that feels like playing Magic with the training wheels on, at least when it comes to the Commander format. What I do like is hasty beats, though — so I figured giving Maelstrom Wanderer a go was a good way to try and cultivate a love for the color combination.

It’s also a great place to jam all of the sweet cascade cards from Commander Legends, and some of the more cascade-flavor cards from previous sets, like Ixalan’s Sunbird’s Invocation.

That’s not all, though. Building a Temur deck like this one is also an opportunity to:

All in all, I set out to build a version of the deck that didn’t include any intentional combos, and didn’t set out to do anything “degenerate” beyond accumulating sweet, sweet value.

Therein lay one of the issues of building a deck like this: how degenerate these types of decks can be with very minimal effort. Despite not aiming to “combo off” or do too much durdling, the deck ended up in a very… antisocial place.

The social contract in Commander asks us to consider that fun is not a zero-sum game. It asks us to remember that for all of the fun we’re having, we might be taking away enjoyment from someone else.

Maelstrom Wanderer — as I said at the beginning — is a deck that elicits groans. Why? Well, it’s mostly to do with the fact that, when not built into a hyper-efficient combo engine, it tends to hog the chess clock. While we don’t play with a chess clock in multiplayer Magic — or even in 1v1 formats — it’s considered antisocial to hog the time of the table. And in a deck that can take 10-minute turns, it’s hardly surprising why Maelstrom Wanderer is often guilty of breaking many Commander faux pas.

In my testing, I had many opportunities to pull off turns with six to ten cascade triggers before resetting with Release to the Wind. I was able to (unintentionally, I’ll admit) use Eternal Witness and Equilibrium to essentially cast my entire deck by rebuying the Release to the Wind, and recasting Selvala, Heart of the Wilds to generate the mana I needed.

While this kind of thing can be interrupted by opponents with the right answers, they either need to draw them early to stop the deck setting up, or they need to wait for the deck to resolve everything before casting a Settle the Wreckage or similar in combat.

What ends up happening a good amount of the time is that the Maelstrom Wanderer player ends up taking up a lot of time without actually winning the game. And while, yes, they could avoid this if they “built the deck ‘properly’,” the average player at the LGS might not be as fluent in Commander and as good at Magic as the person reading this. Hell, they might just not play decks like this very often, and decide to experiment with building one.

So, while my experiment of building the deck wasn’t particularly enjoyable for me, it did leave me with some valuable learning experiences:

Next, I’d like to dig into those learning experiences a little more.

Cascading Out of my Comfort Zone

As someone who considers themselves not bad™ at Commander, and quite capable of building decks and winning games, I’d be foolish to say that I knew it all. I don’t play all archetypes equally, and part of that is that I just don’t enjoy them. Everyone has a style of Commander they enjoy most, but what’s important for your growth as a player is to dip outside of that zone from time to time.

My preferences are usually for tables where combat and flavor matter, and nonsense is limited; or, tables where we’re all playing optimally, like in cEDH. In that sense, I guess I’m closest to wearing the Artisan or Athlete hats, but I, like all of us, could do with wearing the Explorer hat from time to time.

The biggest takeaway for me was that this kind of deck requires practice, especially with multiple triggers and effects (Sunbird’s Invocation, multiple cascades, Momir Vig, Simic Visionary). With all these effects popping off at once, it’s a big tax on your mental capacity.

One way I found to help is to use physical aids. These can be simple things like leaving a coin on top of your library when playing a Necropotence to remind you not to draw for turn.

In this instance, I would recommend using physical cards or dry erase tokens for the stack, and a D20 for your storm count.

Notice how much simpler it is to track triggers and the stack when using physical aids. In the above example, you resolve the Aurora Phoenix trigger, resolve the Momir Vig triggers to put a tutored Thryx into your hand, and then resolve the first cascade trigger from Imoti triggering. I hit Sweet-Gum Recluse, which I cast, which then adds more triggers to the stack.

Once you ultimately resolve those, tutoring a Glen Elendra Archmage to the top for the green Momir trigger, you then get a Kodama trigger for Glen Elendra Archmage entering play. All of this is quite hard to keep up with if you’re not experienced with playing decks with so many triggers on the stack, and I highly recommend using a visual aid to help you process it correctly.

The best part about practicing with triggers in this way is refining your ability to use the stack. The stack is one of the most elegant parts of Magic gameplay, and any chance to flex those muscles is a chance to improve your understanding and ability to play “on the stack.” Even if you’re not planning on playing decks like this very often — or even at all — you can improve the skills you’ll need for gameplay.

In piloting a deck like this, I was able to identify which parts of the deck can be antisocial. The biggest part is the chess clock, but more than that, it’s the use of multiple triggers and the stack that can be an issue. Not everyone is a whiz at complex turns, and whether you’re on Aristocrats or Superfriends, there are plenty of decks out there guilty of playing in a selfish manner. Without concerted effort and practice, you might just be letting down your friends.

The solution, in my eyes, is to actually embrace combo. For a lot of us, combo is unenjoyable because of the arbitrary nature of ending a game. While it’s true that this can be anti-climatic at a table where interaction is light and people are building for more casual fun, it gets better as soon as you get to the more optimized tables.

You absolutely need a way to end a game that doesn’t involve the other players going to make a cup of tea while you figure out if you can win or not! Adding inevitability with combos does increase the power level, but it’s necessary for a good playgroup experience.

Trying something new might not always result in a deck you’d like to keep built, but it can give you new scenarios to learn from that can enhance your Commander experience. Even if you find out that you don’t enjoy piloting a deck like Maelstrom Wanderer (which I didn’t), you might find out more accurately what Commander means to you. You might also learn a thing or two about playing against this kind of deck, too.

Let me know what you’ve learned from stepping outside your comfort zone over on Twitter.