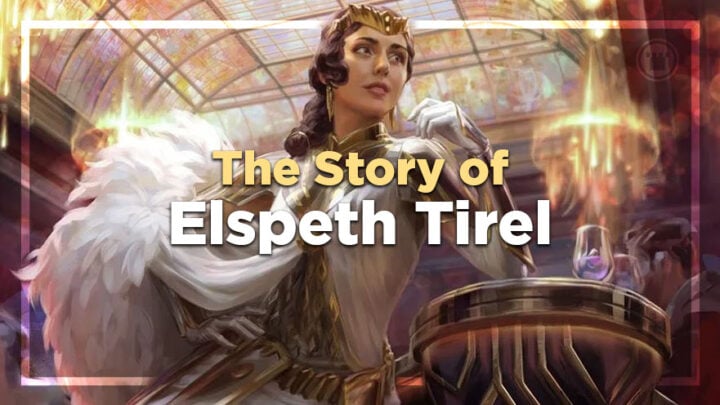 Elspeth Tirel returns in Streets of New Capenna, and Chris runs down the story she has carved through the overarching plot of MTG.

Elspeth Tirel has been in the game since Shards of Alara, and not even death has been able to keep her off the page for too long. Let’s look at how her story has gone in the lead up to her latest appearance in Streets of New Capenna. This is going to be a basic overview – I’m trying to summarize about 10-12 sets’ worth of story, so let’s get going!

We don’t know much about Elspeth’s early childhood, but what we do know is pretty grim – when she was 13, her home plane was invaded by the Phyrexians. Seeing everyone she knew either killed, tortured, or compleated, her spark and powers manifested as she was about to be dragged to her fate.

Her first wild planeswalk took her to Theros, where she met Daxos, witnessed fighting amongst the gods, and acquired her Sword of Chaos before once again fleeing for another plane. She spent the next few years never remaining in one place for too long, traumatized by her experience at the hands of the Phyrexians. Finally, at 16, she stumbled across Bant in the plane of Alara.

In Bant, Elspeth found a home in the idyllic hills and peaceful rolling plains of the shard. More importantly, she found a purpose, starting her training as a knight at the age of 16. By 20, she was a fully-fledged Knight of Bant. She had learned how to protect herself, and to protect the people she loved, and for a while, that was enough.

Then Ajani Goldmane came crashing out of the sky, bringing with him the initial tidings of the Conflux war. Elspeth had kept her planeswalking powers and abilities secret, but finally unleashed them while fighting back an incursion from Grixis and saving her squire Aran. In doing so, she broke the chivalric rules of combat on Bant – and while the people she saved were grateful, she couldn’t help but feel that she no longer truly belonged among them. Having given up her role as a knight, she continued to fight in the Conflux war under Rafiq. Gravely injured at the battle of Jhess driving away the forces of Esper, during her recovery she learned the true nature of Bant’s troubles by questioning Gwafa Hazid, and joined back up with Rafiq to defeat Malfegor, completing the defense of Bant as the Conflux war ended.

A (Fighting) Pit of Despair

Bant was saved but was forever altered. Elspeth, feeling she had failed to protect the core of her adopted home, left the plane of Alara, and settled for a time in darkness of Urborg. Grief-stricken and angry at her lot in life, she earned her keep fighting in gladiatorial pits. Facing a particularly difficult opponent, she managed to win the fight when the man was distracted by the appearance of Ajani in the crowd, revealing the mark of Phyrexia on his arm. Enraged, she would have killed the man if not for Ajani’s intervention.

Ajani pleaded with Elspeth to return to Bant, to help the people of the plane. She refused, having lost the hope she had before the Conflux war. Ajani relented, leaving her with her old armor that she had abandoned along with her adopted home. After Ajani had left, she sought out the man with the Phyrexian mark.

This man turned out to be Koth, a geomancing planeswalker from Mirrodin. The metal plane was being slowly overtaken by the invading Phyrexians, and Koth had left seeking aid against the threat. She was reluctant to help, memories of the Phyrexians still filling her with an old dread. Koth was looking for another planeswalker, Venser, and Elspeth accompanied Koth to their meeting. That meeting did not go particularly well – Koth, enraged at Venser’s experiments on old Phyrexian technology, encased Venser’s head in stone and forced him to planeswalk to Mirrodin. Elspeth was understandably appalled, but Koth offered no apologies, simply saying she could come and seek whatever atonement she could find or stay and continue wallowing in her despair.

Elspeth decided to follow Koth and Venser, and the unlikely trio made their way towards an old friend of Koth’s. Along the way, they faced an ambush of infected nim. While Elspeth helped handily defeat the attackers, coming face to face with Phyrexians crumbled her resolve, and she left the other two planeswalkers.

Exhausted and alone, Elspeth took refuge with a shaman of Koth’s people, the Vulshok. Elspeth remained focused on her past, but some harsh words from the shaman reminded her that while she might have the luxury of focusing on her past trauma with the Phyrexians, people were still currently dying or worse at their hands, and that she was no longer the child she was when she last faced them. These words struck home, and Elspeth took up her sword and hurried to catch up with her erstwhile companions.

As it turned out, they had been captured, but a newly emboldened Elspeth was able to quickly free them and made short work of their captors. The trio made their way into the core of Mirrodin, facing various threats and allies, encountering Ezuri, Tezzeret, Glissa, and Melira along the way. Elspeth fought fearsomely, cutting down countless Phyrexians as the group slowly worked their way towards Karn, the plane’s creator. Through many battles and detours, they eventually made their way to the heart of Mirrodin, and there found Karn, his heart corrupted by the Phyrexian oil.

Elspeth and Koth were warriors, trained and talented in fighting. Venser was a scientist by nature, and not well suited to the battlefield. While the journey to Karn had taken its toll on all of the planeswalkers, Venser was the worst off, slowly dying from too much exposure to the Phyrexian infection. Venser used the last of his strength and magic, sacrificing his life and using his spark to try to cure Karn.

His desperate gambit worked, and with the plane’s creator now at their side, the group of planeswalkers set out to lead the resistance against the Phyrexians. But the Phyrexians had taken too great a hold on the plane, and grievously wounded, Elspeth planeswalked away just before she would have been killed, losing consciousness as she did.

She awoke on Theros, the plane she had originally escaped to all those years ago. She coalesced from her wounds at a temple of Pharika, joining a mercenary band once she recovered to try and quietly earn her living. Her Sword of Chaos, acquired all those years ago from the gods here on Theros, drew the attention of those same gods. The gods vied for the blade, with Heliod transforming it into the spear Godsend and sending Elspeth to Meletis. Kruphix eventually sent the gods back to Nyx to preserve the mortal realm. At Meletis, the city was beset upon by Polukranos. With the help of Daxos, her old friend, Elspeth slew the hydra and earned her place as Heliod’s champion.

Things were peaceful for a short time, with Elspeth and Daxos growing closer and feeling out their relationship. Reports of Nyxborn attacking humanity started to surface, and the pair eventually made their way to Akros to find out what was causing the attacks. There they met Xenagos, a satyr, who devised a plan that helped the humans defeat the attacking army. In the revelry that followed, Xenagos revealed his true plan, tricking Elspeth into killing Daxos and using the power of the celebration to ascend to godhood.

Cast out and scorned by the gods, Elspeth found an unlikely ally in Brimaz and the leonin of Theros. Meeting up once more with Ajani, the two traveled to Nykthos at the edge of the world, having several adventures along the way. Enduring Erebos’s ordeal, Elspeth earned passage into Nyx, where she and Ajani defeated the new god Xenagos and rescued Daxos from the underworld. As they fled Nyx, Heliod betrayed Elspeth and slew her with Godsend.

But death on Theros is not the end. After a time, Ashiok came to the plane, spreading their nightmares far and wide. Elspeth, sleeping in Illysia, was not immune, and suffered many nightmares of her dark past. In one such nightmare, she wrested Heliod’s weapon away from him, and this shadowy version of the weapon remained with her when she woke.

Armed with the Shadowspear, Elspeth rallied the dead around her and tried to escape the underworld. Pursued by Calix, Elspeth nevertheless fought her way to Heliod, defeating the god as she ate away at his followers’ belief.

Defeated, Heliod was banished into Erebos’s realm, and the god the dead granted Elspeth a boon in return for defeating his ancient foe. She returned to the land of the living and met for one final time Daxos before planeswalking away to somewhere new.

On Dominaria, Elspeth once again found Ajani. He told Elspeth of her home plane, and of New Capenna, the last surviving city of the plane that had somehow repelled the Phyrexian invasion in which Elspeth was captured so long ago. Spurred on to find out by what means New Capenna had used to defeat the Phyrexians, Elspeth set out to return to her home plane. New Capenna was nothing like the more medieval plane she remembered, and she tried to keep a low profile for a while as she acclimated.

Defending a shopkeeper from a shakedown, Elspeth’s natural heroism drew her into the circles of the crime families that run New Capenna. While in the midst of intrigue revolving around the Maestros, the Cabaretti, and Giada, the Font, the balance of power in city was upended by Ob Nixilis, known in New Capenna as the Adversary. With aid from Vivien Reid, and the sacrifice of Giada giving her a new weapon in Luxior, Elspeth was able to defeat Ob Nixilis (who fled to fight another day).

Gaining access to the Maestros’s Archives, Elspeth and Vivien learned the truth of how New Capenna had repelled the Phyrexians. The angels who used to live there had been betrayed in a pact with the demon lords, who had converted the angels into the substance known as Halo. Halo was extremely powerful, and it was that which let the demon lords defeat the Phyrexians. Armed with this knowledge (as well as a small cache of Halo), Elspeth and Vivien headed off for Dominaria, to meet with old friends and share what they had learned.

And that’s where the story of Elspeth Tirel leaves off for now. She figures to have a key role to play in the coming fight with New Phyrexia – will she finally settle the score and find peace? I, for one, certainly hope so. She’s already died once; it’d seem sort of mean to have her die again.