Halloween is finally here! Time to jump into an Innistrad draft on Magic Online, carve Magic-themed pumpkins with friends, and marvel at some of the game’s most hair-raising pieces of art. We’ve compiled a list of the ten creepiest Magic cards, based on their art and flavor text, and while fear is subjective, we think this list captures the breadth of what many of us find most frightening. Grisly work indeed! This is one piece of card art that never fails to keep me up at night. The art itself is pretty benign, but quite a few players are still a little creeped out by The Ghost Kids. Shadows Over Innistrad features plenty of body horror, including mutated hands and characters with mysterious tentacles. The embedded eye in Magnifying Glass is the sort of thing you don’t notice until someone else points it out to you — and once you see it, you’ll get chills every time you cast the card. 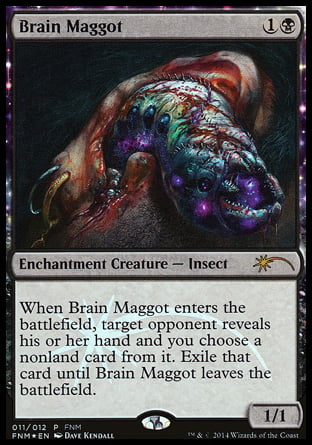 Some promo cards are even creepier than their original printings, including Unmake and Abrupt Decay. While Brain Maggot’s original art was a bit unsettling, it doesn’t compare to this image of the slimy thing crawling out of an unsuspecting ear. While Magic artist Steven Belledin often aligns himself with the school of imaginative realism, his art takes occasional detours into the surreal. Deathmark and Treacherous Urge both feature dark and disturbing artwork, but Surgical Extraction is by far the bleakest thing he’s created. Learn more about the art of Steven Belledin in this video by our affiliate TheMagicManSam! Speaking of CK Affiliates, I nearly forgot about this creepy piece of art until I listened to a recent episode of Magic the Amateuring. Think you’ve had the last word? Gainsay says otherwise! While some creepy Magic cards depict implausible and surreal scenarios, others scare us because they evoke real fears. Claustrophobia shows a man screaming to be let out of a coffin after being buried alive… …and Pulling Teeth is sure to make you wince if you’ve ever had a bad experience at the dentist. Recurring Nightmare‘s artwork is closer to the surreal end of the spectrum, but it still captures the discomfort many of us feel when we’re having bad dreams. Finally, no list of creepy Magic cards would be complete without Creepy Doll. I hope the town magistrate turns up soon.

Didn’t see your favorite creepy Magic card on this list? Tweet at us at @Card_Kingdom and let us know!