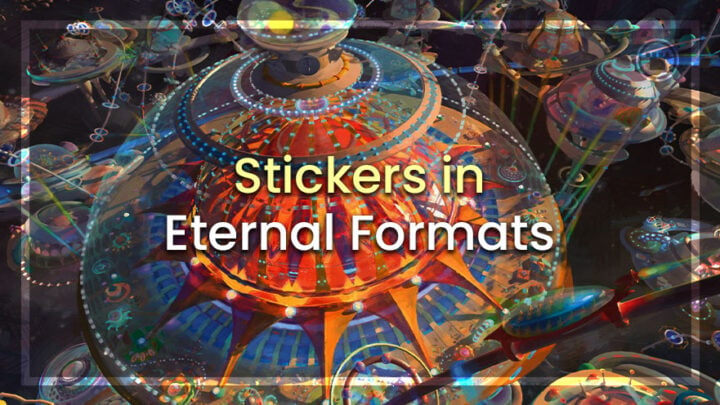 UNFINITY, like any Un-set, continues a 25-year tradition of having fun by stretching Magic to its limits as a game. However, Wizards of the Coast is breaking with tradition by making half the set playable in eternal formats like Legacy, Vintage and Commander, where tournaments sometimes take place. While adding more cards to these formats is usually cause for celebration, after spoilers revealed that the Stickers mechanic from UNFINITY will make its way to these more competitive environments, players have realized this set may not be as low stakes as originally expected.

While most of UNFINITY’s most chaotic fun will be kept away from more mainstream Magic, one of the set’s headlining mechanics is making the jump: Stickers. That’s right! Like counters (but stickier), these stickers can permanently alter properties of other cards — including their power, toughness, abilities and even their name or artwork.

Stickers are applied differently based on which card effect is invoking their use, but several cards have already been spoiled that could be used to unleash all kinds of kooky combinations by stickering up any non-UNFINITY cards you like.

I don’t like to be an alarmist about Magic, so let’s get a disclaimer out of the way first. I believe it’s very unlikely that stickers will become a dominant mechanic in any of the three tournament formats where they’re legal.

There are still plenty of UNFINITY cards left to spoil, but the ones we’ve seen hint that the power level here is intentionally aimed well below competitive standards. Wizards has a long history of under-tuning cards which might cause issues if they became popular in the metagame, like the unique Planeswalkers from starter pre-cons.

The biggest X-factors are the stickers themselves, since there’s a range of different sheets in the set and most of them remain unknown at present. But unless one of the ability stickers can modify a low-cost creature to be immediately lethal (ala Swift Reconfiguration on Devoted Druid), then you may never see these cards in tournament play.

I’m sure the majority of competitive players who have been reacting to these spoilers also understand that, as well as Wizard’s rationale for making the mechanic legal in the first place. But as many of them have pointed out in community discussions, even the possibility of stickers raises immediate concerns for both players and judges.

There’s the visceral reaction to the idea of applying anything sticky to thousand-dollar pieces of antique cardboard (these are Eternal formats, after all). Even if you assume a double-sleeved Volcanic Island is sufficiently insulated from sticker-related wear, you could easily damage that outer sleeve or leave patches of adhesive on it over the course of an event — which could effectively mark those cards and get you in some serious judge troubles.

On the other hand, the judges might themselves be preoccupied with all the new sticker-related rulings. The name-altering stickers are on an obvious collision course with “named card” effects like Pithing Needle. And even if the ability-adding stickers avoid any unique interactions with layers and timestamps, judges are guaranteed to go hoarse answering those sorts of questions for every player in the room.

But can this really be a serious issue if none of these UNFINITY cards manage to stick around in the metagame? Unfortunately, yes — thanks to the sticker sheets themselves and the importance of hiding information in competitive Magic.

The precedent most players look to in situations like this is the “miracle” mechanic, which was introduced back in the original Innistrad block. If you want to cast a card for its miracle cost in tournament play, you need to decide that and reveal it “as you draw,” without ever physically adding the card to the rest of your hand. This led to miracle players adopting a very deliberate and distinctive two-step drawing motion, creating a more obvious window to consider and cast a potential miracle.

But now you have to perform this same ritual every single turn, or you’re giving your opponent free information on whether you drew a miracle or not. And now that players with miracles are all drawing their cards in a specific way, ANY player who doesn’t is giving their opponent free information — they must not have any miracles in their deck. All of a sudden, a generation of competitive players have learned to draw their cards weird because of a single mechanic that most of them didn’t even use.

A more recent example is the Snow synergies from Modern Horizons “forcing” almost every deck to abandon non-snow basics because it was slightly more optimal to maintain the possibility of casting a card you never registered. So you can be sure that even one sideboard-playable sticker card will put pressure on Legacy and cEDH players to carry around sticker sheets in their deck box for the bluff factor alone.

In fact, head Magic designer Mark Rosewater indicated that players will need to register a full 10 sticker sheets with their deck list when playing Constructed, and then randomly choose three of those to use in each new game. Those rulings alone add several annoying layers of extra rigmarole to every game, all so one Un-set mechanic can potentially be played in black border. For once, the gatekeepers trying to enforce a line between casual and competitive Magic might have a point.

The problem with pieces

OK, so perhaps the stickers are better suited for laid-back, casual play. They do look like tremendous fun for straight-up UNFINITY Limited, where everyone is going in with an open mind and the sticker mechanic is a prime attraction.

But what about the average Commander group, whose demographic weight seems to be so influential on the direction of Magic? Wizards recently justified making the Universes Beyond Secret Lairs black border rather than silver as a way to endorse their use in friendly Commander games. The assumption by Wizards seems to be that stickers, being novel and comedic, could be home-run hits with the casual audience. The actual reaction from the playerbase, like the sticker mechanic itself, has been more complicated.

An excellent reddit thread created as a response to the UNFINITY spoilers argues these stickers are part of a trend where more and more extraneous game pieces are appearing in Magic. These little props — be they dungeon cards, emblems, sticker sheets, keyword counters, MDFC reminder cards or whatever else — have become a major design trope in the last few years, with new ones appearing in nearly every set.

While they do add a little to the tactile joy of paper Magic, each extraneous game piece makes the average boardstate harder to track and parse accurately. The issue is made more acute in large multiplayer games, or when playing over webcam. Since that already covers the majority of casual Magic played in the last few years, it seems like stickers may not be so casual friendly after all!

Having any hope of accurately representing mechanics like this increasingly relies on sourcing the official tokens and other components, which is tiresome and sometimes expensive. Stickers look particularly bad on this front given that they’re disposable — and what happens when we’re no longer regularly opening them from UNFINITY booster packs?

Rosewater did try to get out in front of this issue by suggesting it would be legal to substitute simple paper labels for the official stickers, and that an app will exist to help generate a random set of stickers to use in games where you don’t have the physical sheets on-hand. But now we’ve somehow managed to introduce yet more extraneous game pieces in the course of solving a problem caused by other such pieces.

Sticking to your guns

As the enfranchised casual players on that Reddit thread opined, Magic isn’t meant to be a board game you lug around along with a cumbersome, rattling box of parts. No small part of its surface appeal is the idea of a game where most or all rules information is represented directly on the cards in play — cards which ideally can be carried in a reasonably-sized deck box. This decrease in “portability” for Magic also has consequences for players with a disability, whom Wizards has historically looked out for when designing the game.

Even setting all else aside, the extra burden of tracking progress on a dungeon card or sliding MDFCs in and out of sleeves to flip them can quickly sour players on the gameplay in question. So, while a handful of fun sticker cards from an Un-set aren’t going to destroy the game of Magic on their own, I hope Wizards is still taking this nuanced reaction into account somewhere. Products like UNFINITY are all about the love of Magic for its own sake, but let’s be certain we aren’t accidentally making the game harder to love.