Modern Horizons 2 has already taken Modern by storm on Magic Online, shaking up the metagame and adding a lot more power to the format. After the first weekend of results, one card has risen above the rest — well, one combination of cards: Shardless Agent and Crashing Footfalls. Today, we’ll look at a Temur Cascade deck that placed 2nd in last weekend’s MTGO Challenge and talk about how it works and how we can update it for the mirror.

These decks lean on abusing the cascade mechanic to cast multiple spells in a turn. Every spell in the deck has a mana value of three or higher outside of Crashing Footfalls, so you’ll always cascade into it. A lot of players assumed that Ancestral Vision was going to be the default cascade spell for these decks, but some people had the real vision: 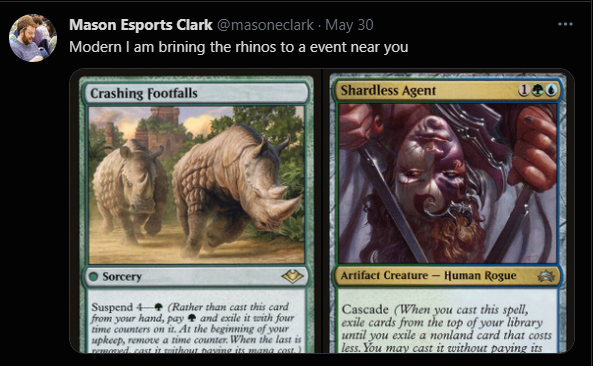 Crashing Footfalls provides instant value and allows you to have a burst of pressure out of nowhere, with a suspend cost you’ll happily pay if you have to. While Ancestral used to be the go-to for these situations, getting instant, reliable bodies is vital in Modern right now. Ancestral does get you three cards, but they’re random and you do have to actually cast them. That might seem like a snide comment, but when all your cards have to have a mana value of three or higher, it’s hard to deploy them all without losing tempo.

Meanwhile, the Rhinos just hit the battlefield and start going to town. Two 4/4’s are easily worth two cards, and that’s before any potential trades. Getting ten power across three bodies is a lot to answer in Modern; we have enough pressure to actually win games and catch up against players who have been double-spelling.

Temur Cascade is a midrange deck at its core, and it leans on flexible support cards to prolong the game and ensure the combo resolves. This deck also has an interesting puzzle to solve, in that its interactive cards have to cost at least three mana, lest you accidentally cascade into one. While the deck is still in the early stages of development, I think players have done a good job of finding good cards to solve that puzzle. This build of Temur Cascade is full of “two-in-one” spells, like adventure creatures or spells with alternate casting costs.

Bonecrusher Giant, Brazen Borrower and Fire // Ice are the main ways this deck controls the board. Modern still has plenty of decks trying to quickly get on the board, and these cards buy us time without interfering with cascade. While Lightning Bolt is often the damage-based removal spell of choice in Modern, Shock variants are actually quite potent when you look at the early game plays most decks can produce. While Petty Theft isn’t the most efficient play you could make, it does a fine job of keeping the opponent on the back foot while also being a nice catch-all.

But the cards that really tie the deck together are our reactionary free spells. Force of Negation allows you to keep problematic combo decks in check while protecting those Rhinos you spent time setting up. The other free spell is Subtlety, which will prevent your opponents’ creatures and planeswalkers from taking over the battlefield.

Our two blue spells help keep opponents from executing their game plan, and they also highlight why Crashing Footfalls is so important. Without Footfalls, we couldn’t clock our opponents quickly enough to make up for the card disadvantages these cards create. With so many ways to avoid losing to Cryptic Command, we can prevent opponents from doing their thing while we cross the finish line.

I’m not going to lie to you: the sideboard for this deck surprised me a bit. The deck plays a bunch of Leylines that it can’t naturally cast, the idea being that you get more free spells that don’t interfere with cascade. We have Blood Moon in the board for big mana strategies and Anger of the Gods for decks that try to go wide. Finally, Mystical Dispute helps ensure our most critical spells resolve.

In short, this sideboard tries to use hammers to solve its problems. Unlike some decks which have lots of flexible cards, this one tries to have something that’s just lights out for your opponent when you cast it. It’s a strategy I can respect, given how volatile Modern can be.

While this sideboarding approach may be hard to avoid, I think this deck could explore using its cascade cards to find those “lights out” sideboard cards for certain match-ups. While Footfalls is a necessity in Game One if you want to win quickly, some decks in Modern might fold to cards that they aren’t expecting given our deck building restrictions. Modern is incredibly open right now as players try to figure out what is best for the format, so we’ll likely need to revisit the sideboard once things settle.

Modern is changing rapidly as players experiment with Modern Horizons 2. In the time I spent writing this article, the MTGO Zoomers (as they refer to themselves) have already proposed an alternate way to build this deck.

Four-Color Cascade looks to trump the mirror by playing white for Ardent Plea and Teferi, Time Raveler. Teferi wins the cascade mirror, since it prevents players from casting spells off a cascade or suspend trigger. Teferi also turns off Force of Negation and Subtlety, meaning that sticking one will pull you very far ahead. Plus, Teferi is generally good against a variety of other Modern decks, so you won’t be sorry to have him in the deck.

Meanwhile, Ardent Plea gives you another way to cascade and access to exalted triggers, both of which will be pivotal in the mirror. You can even use Teferi to pick up your Plea and cast it again, which means cascading into even more Rhinos! This also opens us up to more sideboard options and cards we can cascade into.

Time will only tell if this build is better than the original, but it looks very promising as the next level of this archetype.

Why Play this Deck?

Temur Cascade might just be the best midrange deck in the Modern format right now. It quickly applies pressure while being able to go long and disrupt opposing strategies, all while sidestepping the mana system. If you’re looking for a deck that plays fair, interactive Magic, this is the deck for you.

What have you been liking in Modern Horizons 2? Tweet at @masoneclark and @card_kingdom and let us know!