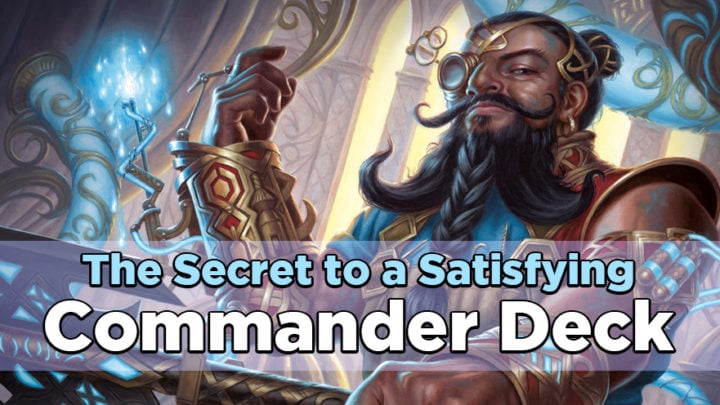 It is likely that more words have been devoted to Commander deck-building than any other topic in Magic history. And not for no reason! Commander is the most popular way to play Magic, and a large portion of its audience plays only Commander — a testament to the depth of the format and the appeal of social, multiplayer gaming.

That depth is a benefit of the Vintage-sized card pool and a deck-building tradition focused on self-expression over optimization. Building around an obscure or niche commander can be one of the best ways to explore Magic’s history and discover exciting cards and interactions! For most of its history, Commander has been about deck-building as an individual journey, and the foibles of individual budget, opinion and card availability ensured that barely any two decks were alike.

But the advent of stronger and more Commander-focused card designs in products like Commander Legends has provoked a strange ennui in some players. When new staple cards are printed specifically for Commander rather than left buried in past sets for each player to unearth on their own, will deck-building still have the same organic joy to it? Can that original lightning be bottled?

I say that it can — so long as we understand what makes casual multiplayer Magic fun, and that we make deck-building decisions which play to those strengths.

I believe narrative is essential to enjoying Commander, and Magic in general. For a Standard or Modern aficionado, the underlying story can simply be their quest to improve and win events. But without the structure and competition inherent to organized play, the narrative of a Commander player is destined to be introspective — gradually becoming the best version of your (Magic-playing) self. This is why the idea of upgrading and evolving your deck over time is so core to the Commander experience!

But what is your deck evolving into? That answer can just be “the strongest one,” but that journey tends to involve minimal creativity and maximum expense — not a great return for your hobby. Instead, players usually set their own subjective goals: build around this specific commander, avoid using any non-elf creatures, or creating the largest, messiest stacks possible with Grip of Chaos and Hive Mind. You should be able to define the goal or theme your deck is built around, and ideally it should be something you’re really excited about!

Your identity can be as broad or specific as you want, but ideally it pushes you to emphasize the effects and play patterns you like best in your deck. I know I don’t like to play subpar options on purpose, so I search for ways to build them such that the things I want to be doing become my best option.

I wanted a tribal deck, but not to have to play a ton of generic tribe-buffing permanents? Celestial Kirin disincentivizes sinking mana into noncreature permanents. I wanted a voltron-style deck, but to have more to my plan than just covering my commander in buffs? Oketra the True comes with the most essential voltron keywords as stock, but encourages me to play cool utility creatures to help her instead. I didn’t initially like Daxos the Returned as a commander because his ability would become the best thing to do for the rest of the game and strand all my cool enchantments in hand. So I rebuilt the list as enchantment-creature aggro, where that ability is a natural endgame for my low curve, low card-draw deck.

By narrowing down an identity for each Commander deck, not only do you guide yourself toward more affordable, fun and personal card choices: you create new goals to chase in-game which align more closely to your idea of fun than the often-political question of overall victory.

Having a strong sense of your deck’s identity is one thing, but it’s essential to feel ownership of the deck. I have only anecdotal evidence, but I have found recruiting people to Magic is always easier when you let them build their own deck, or at least choose/open their own precon. Handing somebody a pre-crafted list, however lovingly chosen, does not stick in the same way. Newer players are also far less enthusiastic to borrow decks than you might expect, even if it would give them a more even chance in a game. A knee-jerk resentment towards netdecking is universal across the history of this game.

If the identity of a deck is what shapes the narrative of building and playing a deck, ownership is what allows us to invest emotionally in that narrative. For players who have built their list up over years — adding cards they found in store cabinets or learned about from other players — every slot in that decklist has a personal history, and every combo feels like a reward for their cleverness. The fact that other players in their immediate group are unlikely to be playing more than one or two similar cards deepens that sense of pride in the performance of “their” pet commander/mechanic/decklist.

But if the narrative we unconsciously build around our decks has been one of personal ingenuity — hewing masterpieces from the plain marble of Magic’s vast card pool — it’s clear how the appearance of cards like Fierce Guardianship punctures that. Being handed such a powerful tool directly by WotC replaces the sense of discovery and ownership, especially when everyone else is playing it, too. Ultra-powerful new commanders like Korvold, Fae-Cursed King further impact the novelty which is essential to casual play, as their constant presence from the Command Zone overshadows any 99 you choose to play alongside them. These cards have their merits, especially if you prefer a more competitive approach to Commander, but if you find yourself conflicted about including them, it’s completely justifiable to keep playing what you enjoy instead.

So, if you found an awesome decklist online and copied it only to find you’re not as thrilled about it as you thought you’d be, try changing in a few of your pet cards — even if it seems like a slight downgrade. Or sub out the commander with one from the 99. Even something small like migrating your favorite set of basic lands from deck to deck can help keep you emotionally engaged on that subconscious level that makes all the highs and lows of a game more meaningful.

So, you’ve figured out your identity — what mechanic or aspect of Magic you’re determined to recapture, the signature card effects you’ll use, even a fun joke name for the deck — and you feel great pride and ownership in having built (or at least tuned it) yourself. But you still might not be having a ton of fun with it in games because — and it hurts me to say it like this — your deck might just be bad.

That’s obviously an inflammatory way to put it; the line for what’s “bad” in Magic is subjective, especially in Commander. And not every deck needs to be a hard-nosed winning machine to bring its owner joy. As I said, this format is defined by the pursuit of subjective goals over competitive advantages.

But even when you approach it as a framework for cooperative storytelling, Magic is built as a competitive game. Most people’s goals — even if they are as benign as “get as many Phil and Kaja Foglio illustrations into play as I can” — involve a degree of in-game success.

Competing strongly within a game is simply more fun! You get more resources to play bigger spells and more elaborate sequences. You have a stronger role in the social and political side of the game. You get to make more decisions and show off more of your favorite cards and deck-building philosophy in action to your friends. Having a powerful, functional deck is less about winning 100% of games, and more about ensuring that you have an important, dynamic role in the narrative of those games.

Now, obviously this can be taken too far. If you’re the only one in your group who ever gets to “go off,” pretty soon, you won’t have a group. Narratives where one player is the archenemy get stale faster, even if you enjoy playing the villain. But most often, the negativity around powerful cards or decks has more to do with how they reduce the sense of identity or ownership around a deck, like we just examined.

The idea that it’s bad to “try too hard” at Commander or that it’s somehow more noble or fun to play jank is understandable, but misguided. I see the biggest impact of conflating these sentiments in players who are new to the format, and I wonder how many bounce off Commander with a negative impression as a result. It’s a struggle to enjoy your deck if it doesn’t keep up with the rest of your table, even if your sense of ownership and identity are strong! Mostly I see newer players fall into exactly this trap; they know enough Magic to have an idea of the deck they’re excited to play, but not enough to tune it for the right power level.

A full guide on how to measure and tune the power of your Commander deck merits its own article, and I plan to write that soon. But for those looking for condensed advice: the ingredients of truly fierce competitive decks are infinite combo pieces, tutors to find them quickly, resource acceleration (mana rocks) to cast all those cards faster, and cheap interaction to stop opposing combos developing. Any cards which don’t fit into one of those categories are probably lowering your power level, so consider how many you play when finding the right balance for your table. A “combo” can be any set of cards which effectively ends the game in your favor, be that a “prison” like Teferi + Knowledge Pool, infinite damage/mill, or even a very fast combat clock like Skithiryx, the Blight Dragon + Lightning Greaves. Since multiplayer games heavily punish tapping out, almost all worthwhile interaction is instant speed or static (like Thalia, Guardian of Thraben) and below three mana. Choosing a commander who is also cheap and fits the key categories is a significant advantage.

MAKE YOUR OWN COMMANDER LEGENDS

Overall, I hope that my ideas about what makes Commander fun and how to go about cultivating those factors helps people enjoy the format more. It takes practice to consistently create great cooperative stories out of a competitive game, especially when players may have different ideas about what fun or balanced games look like. Maybe you find it awkward to think of it as cooperative storytelling at all. But I’m confident that if you build decks with strong identities, that you feel ownership of and which have the potential to thrive and show off that identity in a match, you’ll find yourself enjoying Commander to the fullest.