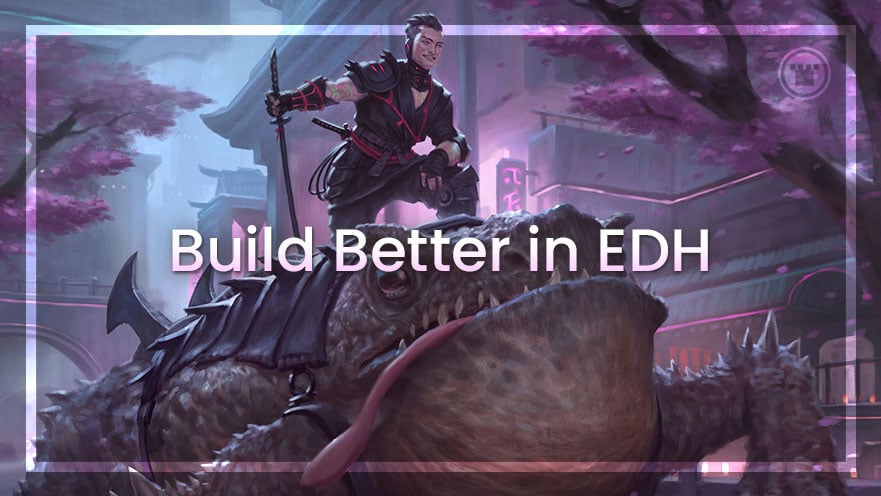 Deck Building can be tricky in Commander. There’s no one way to construct a list, but it can be all too easy to end up with a brew that’s full of the most efficient and popular cards for the format. While there is absolutely nothing wrong with this approach, the result can sometimes feel like the deck lacks its own, unique identity.

Many Commander players like to build a piece of their identity into their decks, but achieving that  can be difficult, especially for newer or more inexperienced brewers. Sometimes the spark of inspiration just isn’t there either, and that can be frustrating for anyone wanting to make something fun and fresh.

Thankfully, I have a number of ideas to help ignite some creativity so you might find the right direction to take your next brew. Most of these ideas come in the form of challenges or restrictions, as well as some general deck building advice. Whether you have trouble picking a commander or theme, or if you want to find something a bit different, this post should have  something useful for you.

It’s important to note that building decks in different ways can affect their power levels. They might be a bit slower or less resilient than optimized builds, but they make up for it with novelty and synergy. These kinds of decks are often much more entertaining to play with and against, and will have you reaching for them for months or even years to come.

The most popular decks in Commander are either helmed by extremely flexible legendary creatures or by creatures with a powerful and clearly signposted game plan. Many brewers tend to shy away from these top commanders, assuming they’ve either been fully mined for new ideas or they’re known for being a one-trick pony.

This couldn’t be further from the truth, however. Almost every commander can be taken in a unique direction. You just need to do some experimentation.

Narset, Enlightened Master is a perfect example. She is infamous as a powerful extra turns and extra combat commander, and most players’ eyes widen with fear when someone takes her out of the deck box. She doesn’t have to be this way at all, though. Her ability can be used in any number of different ways, as long as you build with a high noncreature spell count.

You could build her as a superfriends commander, likely rewarding you with another planeswalker with each combat. If you wanted to maintain focus on Narset herself, you could go wild and add all 18 blue, red and white backgrounds from Battle for Baldur’s Gate, giving her unique new effects with each attack.

Tatsunari, Toad Rider is an extremely popular commander from Kamigawa: Neon Dynasty, and is most often played as a straightforward enchantress commander — or at the helm of an aura, voltron build. Many of those builds tend to share a lot of cards between deck lists, and they aren’t always the most unique choices.

If you wanted to keep an enchantress theme but perhaps would rather it be more on theme with Kamigawa, you can make a dedicated saga enchantress build. I actually brewed this exact kind of deck for Tatsunari in a previous article, so you can read up on that if you’d like some inspiration.

Tribal decks, while fun, can be rather samey. Most popular creature types have a “best” commander, but that may not spark joy for you. If you want a deck to truly feel like your own, you may have to take the commander less brewed, which can be just as exciting to build as it is to play. I’ll give you a couple of ideas to get those creative juices flowing:

Just because a legendary creature might lack a specific lord effect or tribal payoff doesn’t mean it’s a bad commander for that creature type. In fact, it can give a new perspective to the archetype, and maybe even fit a bit more thematically.

Take Araumi of the Dead Tide, for example. She has absolutely no obvious connection to merfolk (other than being one), but the idea of having merfolk rising from the depths to her call feels incredibly evocative. Not only that, but quite a few Merfolk have some decent enter the battlefield triggers, like Silvergill Adept and Shipwreck Dowser.

Playing these out on curve is perfectly fine, but reanimating them with Araumi’s encore ability triples their impact in a full pod, which gives them a much greater impact in the game. In a way, this effect could be seen as a sort of lord effect, making Araumi a great choice for merfolk.

Alesha, Who Smiles at Death is usually known for being a solid, sacrifice-themed commander, since most sacrifice and aristocrats creatures are small enough to be reanimated by her effect. But goblins also tend to be quite small and like to be sacrificed, making Alesha an excellent leader for them.

Many goblins either create more goblins when they enter the battlefield, like Siege-Gang Commander, or have buffing effects, like Hobgoblin Bandit Lord. These are excellent choices to recur either for value or to recover after removal.

A lot of goblins also can sacrifice each other for value, like Sling-Gang Lieutenant or Skirk Prospector, too. These are the core mechanics associated with goblins, and they make it trivial for you to make the most of Alesha’s reanimation ability.

She may not read like it at first, but she may be one of the best possible goblin commanders right now. And according to EDHREC, only 62 players know about this capability at the time of writing. Considering Alesha has well over 3,000 decks on there, that’s certainly what I would call a niche build.

Sometimes you’ll have a commander you really want to build, but you want to make sure that your brew isn’t like the majority of builds for that commander. Thankfully, there are tools available to help you find new tech — most notably EDHREC’s Advanced Filters.

Let’s say you want to build a Selvala, Explorer Returned deck, but when you search EDHREC for inspiration, you notice that Umbral Mantle shows up in almost 50% of decks. It goes (almost) infinite with Selvala and is well-known for being a staple.

By just looking at the cards on that page, there’s no way of telling which cards are present in the non-Umbral Mantle decks, so it can be extremely difficult to parse the data in this way. This is where advanced filters really shine.

You can use the advanced filters section to cut out decks that contain specific cards. Simply select “Without” from the dropdown and start typing the name of the card you wish to exclude. Press the plus button and then click “Filter,” and it will remove all decks from the aggregate data that contains the named card.

This filter can be used to great effect, especially when you want to separate between higher and lower power decks. If you filter out Mana Crypt and Mana Vault decks, you’re almost exclusively looking at non-cEDH decks. And if you specifically include them, you’ll get a snapshot of what higher power versions look like.

The second filter is to refine the data based on card type quantities, and it can be great if you want to find similar style builds to what you’re brewing. For example, if you want to build a Selvala elves deck, you’ll probably want to have a high creature count.

You can select Creatures from the dropdown, select the greater than symbol and then choose a number. This will remove all decks that have fewer than the number of creatures you chose, and will show you a new, more refined set of cards to choose from.

Advanced filters can be extremely powerful, and will help you find some real hidden gems among the millions of decks worth of data. It’s a brewer’s best tool for finding the right spice for an inspired deck.

There are countless different methods to approach building better decks or finding inspiration for the next creative masterpiece. I have more ideas I’d love to share with you soon, though, so be sure to keep an eye out for part two.

Creativity multiplies when shared, so I’d also love to hear about your own inspired decks. Tag me in your favorite brews on Twitter and tell me about the creative ways that you approached building them.